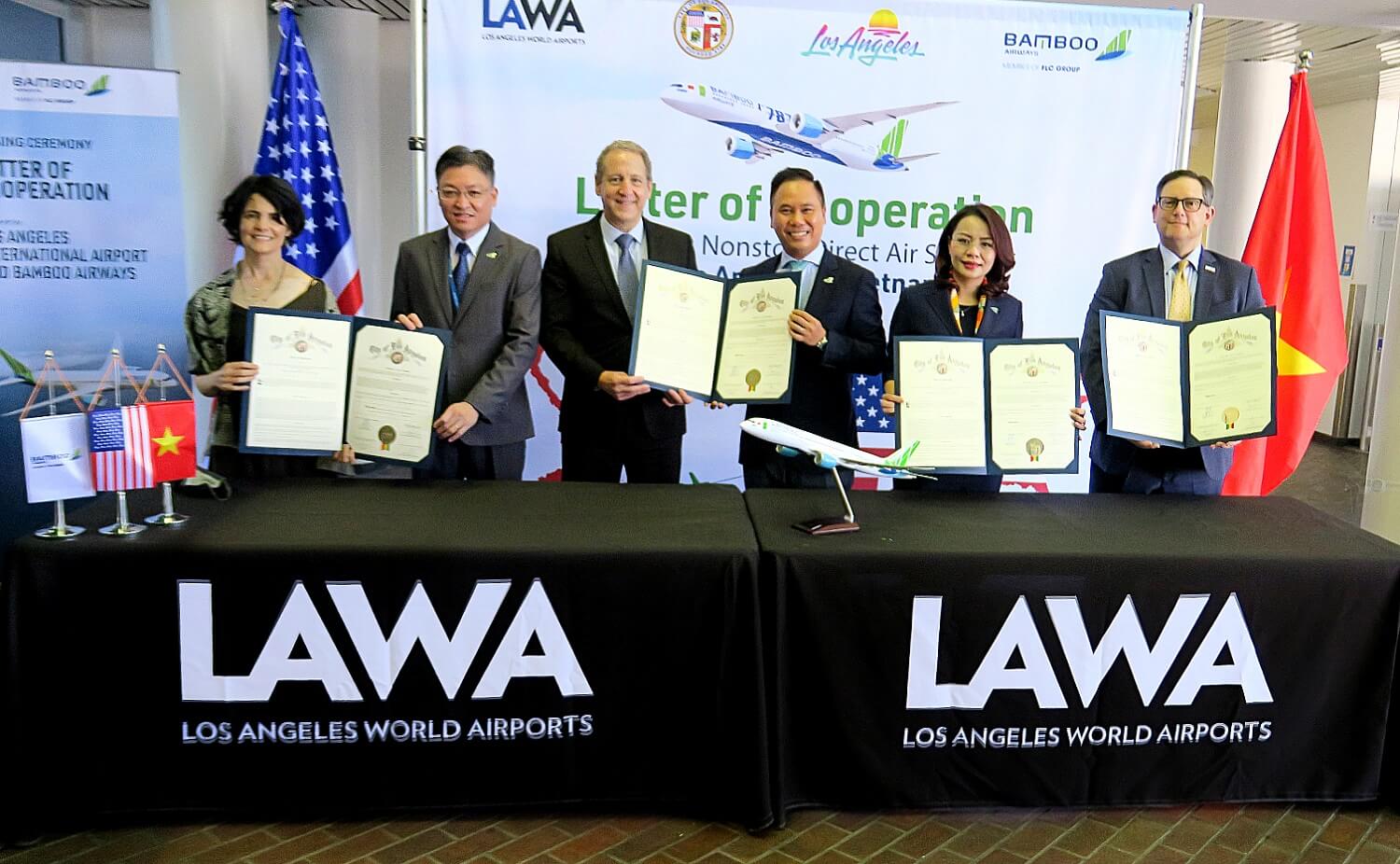 On the morning of September 24, Los Angeles World Airports (LAWA), the Office of LA Mayor Eric Garcetti, Bamboo Airways, and the Los Angeles Tourism & Convention Board (LA Tourism) signed a letter of cooperation (LOC) to work toward operating regular nonstop flights between Los Angeles and Vietnam.

The LOC outlines a mutual desire to enhance tourism and trade between the US and Vietnam by establishing a nonstop flight, creating a framework to support the launch of the first nonstop flight network between LA and major cities in Vietnam.

With this signing, Bamboo Airways is the first Vietnamese airline to become the official commercial partner of Los Angeles – the largest city in California and the second most populous city in the United States.

“The cooperation agreement between BAV and LAWA marks a turning point in not only BAV’s operation roadmap but also the history of bilateral civil aviation cooperation between the two countries,” said Dang Tat Thang, CEO of Bamboo Airways. “We expect this movement will bring direct benefits to the aviation markets in two countries, making a substantial contribution to the development of bilateral and multilateral trade, tourism, and economy, especially in the post-epidemic period. The active cooperation between BAV and LAWA in promoting a nonstop flight network connecting Vietnam and the United States is an important milestone in the airline’s history, proving a significant development in relations between the two parties, and opening up new opportunities in the future.”

In 2019, more than 820,000 people flew between Vietnam and the United States, according to flight and passenger data. About 169,000 of those passengers made the trip to or from Los Angeles, which represents nearly 21% of the overall market between the U.S. and Vietnam. That makes Vietnam the most underserved global market from the Los Angeles area. LA also is the most popular destination city in the United States from Vietnam, with passenger traffic using connecting flights between the two destinations having grown 44% between 2014 and 2019.

California ranks as the world’s fifth-largest economy with strong technology development in Silicon Valley, dominance in agricultural products of the United States, and the world’s movie and entertainment capital Hollywood.

“As one of our largest unserved international markets, we’ve long recognized the potential of direct air service between Los Angeles and Vietnam,” said Kevin Burke, President and CEO, Los Angeles Tourism and Convention Board. “We are thrilled about the opportunity Bamboo Airways brings to the City of Angels.”

The ties between Los Angeles and Vietnam are strong and deep, with a thriving Vietnamese population across the region and a very active business community,” said Justin Erbacci, Chief Executive Officer, LAWA. “There is strong demand for a nonstop flight between our airports and Bamboo Airways shares our desire to fill this critical gap in service. We are delighted to see them move toward the start of charter service, with the goal of creating a permanent and sustainable route in the near future.”

The economic and cultural ties between Vietnam and Southern California are strong. The largest number of Vietnamese people outside Vietnam is in Orange County, followed by Los Angeles County, according to the U.S. Census Bureau.

Los Angeles International Airport is one of the busiest airports in the United States and worldwide, while serving as the hub airport of United Airlines.

The cooperation agreement between Bamboo Airways and its partners in Los Angeles is among Bamboo Airways’ series of activities in the US, including the announcement of the General Agent in the US market; the signing of an agreement with GE to purchase GEnx engines for its Boeing 787-9 aircraft worth nearly US$2 billion under the witness of State President Nguyen Xuan Phuc; the signing of an agreement with CFM International on the selection of LEAP-1A engines and maintenance services for 50 of A320/A321neo aircraft ordered from Airbus, etc.

Previously, Bamboo Airways successfully operated the first special authorization flight from Hanoi to San Francisco on September 23. This first special authorization flight is a history in the making for Bamboo Airways, laying a solid foundation for the planned commencement of non-stop commercial flights connecting Vietnam and the US subject to the US government approvals.