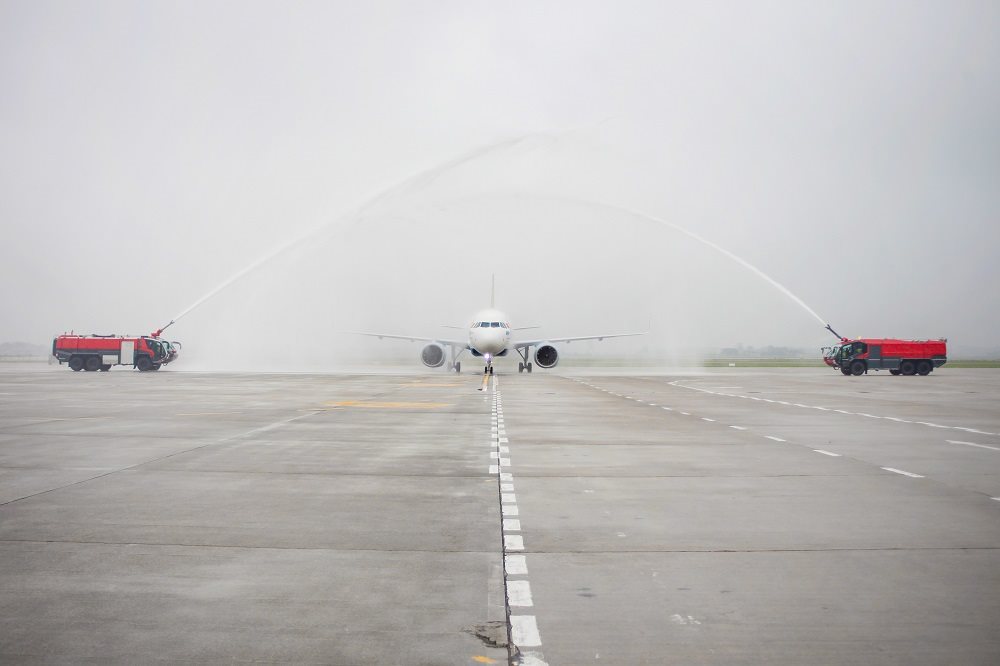 After the arrival of the Airbus A321 at Noi Bai International Airport on February 7, the A320NEO is the second narrow-body A320 family aircraft that Bamboo took delivery of within just one month. This vividly demonstrates that Bamboo Airways is increasingly approaching its target, expanding its fleet size to at least 40 aircraft this year.

On April 2, 2021, at 5 AM, the A320NEO, which was delivered from the Airbus factory, landed on the runway of Noi Bai International Airport and was officially enlisted in the Bamboo Airways fleet. This is the third aircraft that Bamboo Airways has added to its fleet since the beginning of the year.

Inheriting features from the A320 family, the Bamboo Airways Airbus A320NEO is equipped with the new generation of Leap-1A engine from CFM, reducing up to 15% in fuel consumption. Besides, the outstanding design also makes this series minimize noise and gas emissions into the environment.

With the aim of providing passengers ‘more than just flight’ experiences, Bamboo Airways optimizes the interior design of the A320NEO’s cabin which is 27.51 metres in length and 3.7 metres in width. The airline reduced the number of seats from a maximum of 194 seats to 170 seats for passengers’ comfort and convenience with more space for sitting, leaning back, and larger aisle area in the cabin. This adjustment also helps cut the luggage-arranging time when boarding.

The interior of the Bamboo Airways Airbus A320NEO cabin has grey as the main colour, creating a sense of luxury and comfort. The seats are manufactured by Collins Aerospace – a famous American company in manufacturing aircraft interior furniture. The aircraft also has a built-in Panasonic Wi-Fi system, allowing passengers to optimize the experience, access information and in-flight entertainment services.

As soon as the A320NEO landed at Noi Bai Airport, Bamboo Airways A320NEO was sprayed with disinfection solutions of international standards to ensure absolute safety for customers and flight crews before being put into service. The entire aircraft will be sprayed and sanitized thoroughly in 30 minutes, with a special focus on items and areas which are commonly touched by passengers such as seats, dining trays, toilets, overhead storage compartments, etc.

After the arrival of the Airbus A321 at Noi Bai International Airport on February 7, the A320NEO is the second narrow-body A320 family aircraft that Bamboo took delivery of within just one month. This vividly demonstrates that Bamboo Airways is increasingly approaching its target, expanding its fleet size to at least 40 aircraft this year. Two new Airbus A321NEO, A320NEO and one advanced Embraer delivered in January will help Bamboo Airways complement material sources and increase capacity on domestic routes.

Thus, Bamboo Airways will operate the A320/A321NEO fleet of 11 aircraft, in addition to the wide-body Boeing 787-9 Dreamliner aircraft for long-haul routes and advanced Embraer 190, 195 jet aircraft. Bamboo Airways representative said the company will continue to promote activities to increase the total fleet size to 100 aircraft by 2025.

The addition of Airbus A320NEO aircraft by Bamboo Airways affirms the airline’s continuous efforts to expand the fleet size, promote the connection of domestic and international destinations, and contribute to economic recovery and growth after the Covid-19 pandemic. This goal is regarded as a remarkable highlight in the context of many airlines around the world struggling to reduce the number of aircraft to cope with the epidemic.

In Vietnam, the Covid-19 epidemic has been effectively controlled across the country, which plays an important role in reinforcing passengers’ confidence. The number of passengers who travel by air in general and use Bamboo Airways services in particular has been increasing rapidly before the upcoming Liberation Day and International Workers’ Day (30/4/2021 – 1/5/2021).

Bamboo Airways’ representative said Bamboo Airways was ranked 7/7 stars for prevention of Covid-19 as well as absolute aviation safety, which also stimulated transaction activities. As of March 2021, the total number of flights and passengers served by Bamboo Airways has nearly doubled compared to the same period in 2020.

Bamboo Airways currently commercially exploits over 60 routes and has transported more than 7 million passengers on perfectly safe flights. By the end of March 2021, the company has been leading the entire aviation industry in the punctuality rate (OTP) and aimed to gain a domestic market share of 30%. Bamboo Airways was also voted by the international media as Asia’s leading regional airline, the airline with the best service, and the most favourite airline voted by golfers.