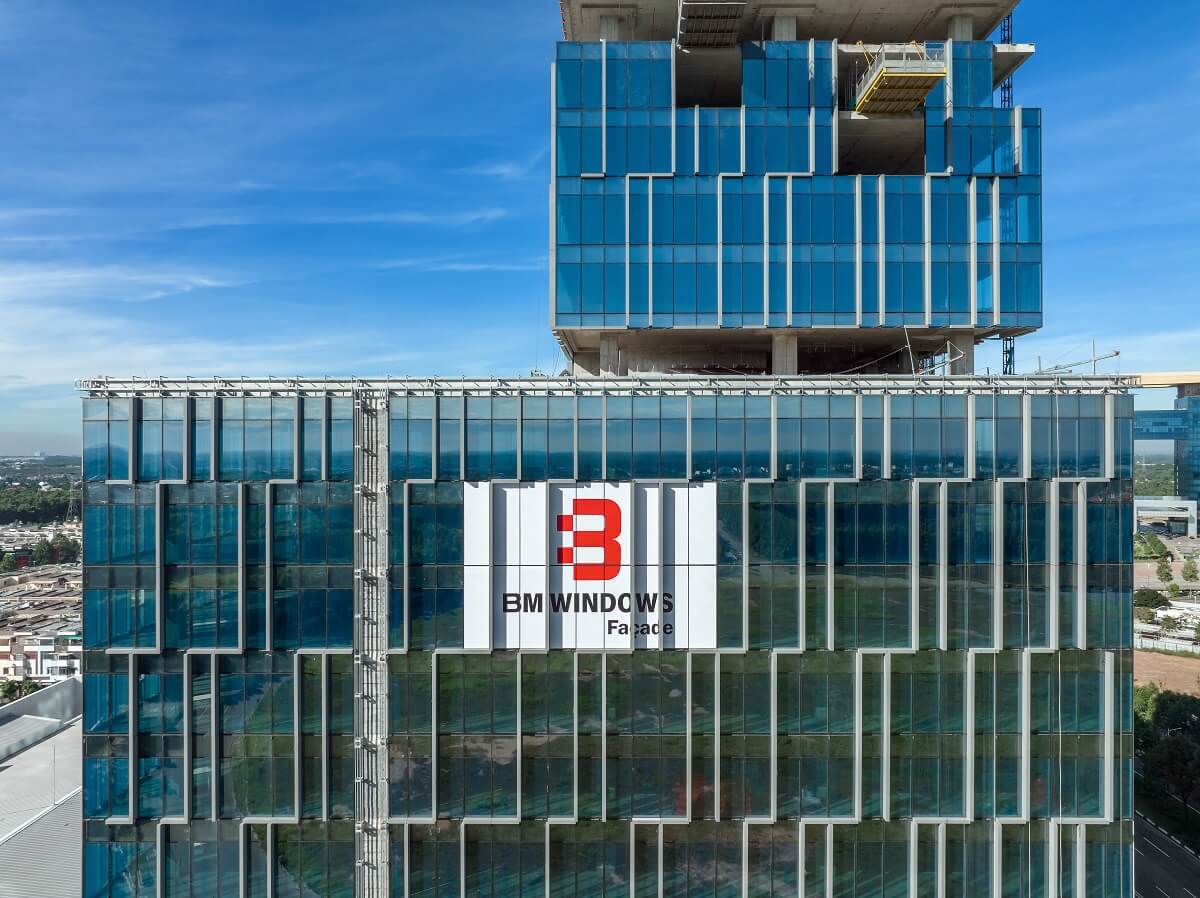 The first impression about an architectural project is always created by its shape and façade. While the shape is the structure, the façade is the face of architectural projects that are developed daily in large cities worldwide. As the society progresses, architects and investors of projects have always paid more attention to the investment in impressive designs which meet international standards and feature particular cultural and creative characteristics. It is obvious that splendid projects have contributed greatly to the civilized beauty of modern urban areas.

Together with the social development, the aluminum glass façade sector in Vietnam has grown considerably. A bright spot of the sector is aluminum glass façade contractor BM WINDOWS as it has got involved in most of outstanding projects in large urban areas. BM WINDOWS has caught up with the rapid growth of international techniques and the diversity of designs to create impressive projects.

New urban areas will bring both opportunities and challenges to investors, architects and BM WINDOWS to create impressive projects representing the vision for the future and the social responsibility in the embellishment of modern urban areas while maintaining cultural values. In HCMC, the Thu Thiem New Urban Area, which is connected with the city’s downtown area through a bridge system, is home to highly-valued modern projects, including three remarkable projects – Metropole Thu Thiem, The River Thu Thiem and Cove Residences Empire City. BM WINDOWS has got involved in all these three projects. Each of them has its own highlight in architecture but they are all connected to nature, enhancing the connectivity between people and the landscapes through aluminum glass façades.

The Binh Duong new urban area has quickly become an attractive investment and development destination with many impressive and large-scale projects meeting international standards and aligned to rapid changes of such a potential area. The Becamex Trade and Service Office Building is a key item of the global trade center project in Binh Duong.

At the 31-storey project, BM WINDOWS has employed the unitized façade solution in combination with impressive aluminum bars, creating the solidity and modernity of the project. Other large-scale projects, such as The Emerald Golf View, Charm City, Le Gia and Sora Gardens II, whose aluminum glass facades are constructed by BM WINDOWS, will also contribute to revitalizing the landscapes of Binh Duong in the coming periods.

Areas with modest land funds in the downtown areas of Hanoi and HCMC will need new breakthrough projects that ensure the harmony with the surrounding environment.

At the Lotte Mall Hanoi project, BM WINDOWS must come up with solutions to the sultry atmosphere in the Hanoi summer together with the temperature in urban areas. Most of the façade of the project is made of glass, and to reduce the impact of the outdoor temperature, BM WINDOWS has used the heat-insulation bridge aluminum formed by Polyamide or Pour & Debridge (P&D) bands and placed them between louvers to minimize radiation heat from outside. As a result, 80% of noise and heat has been reduced while the durability and safety of the façade has improved as bridge aluminum’s heat conduction is 500-1,300 times lower than that of normal aluminum.

Being considered a new symbol of HCMC, The Sun Tower, developed in the Ba Son area in District 1, is one of the three largest office complexes in the city with six-star services reserved for the upper class. The façade of the project also demonstrates the symbolic value of the project with stylized stairs in the air. At the project, BM WINDOWS has constructed the high-end façade and the LED lighting system, providing a worthwhile living space in the center of the city. 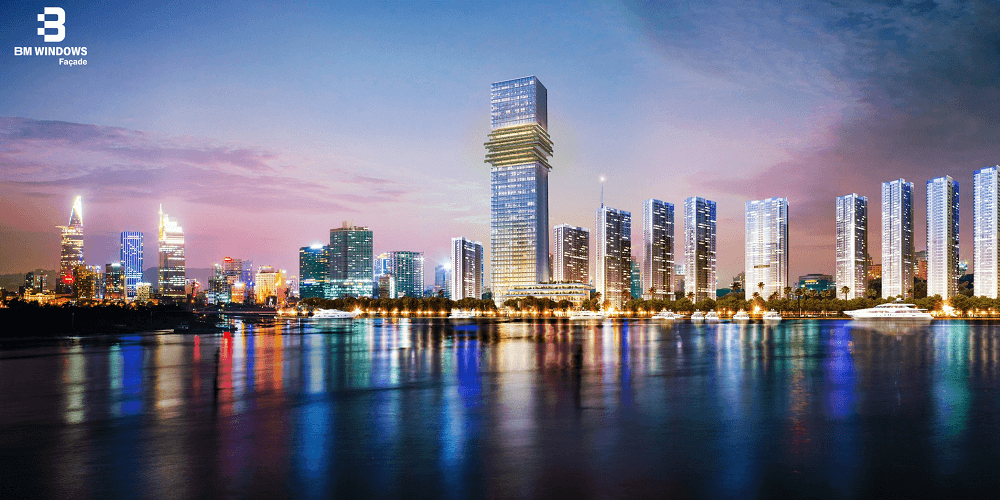 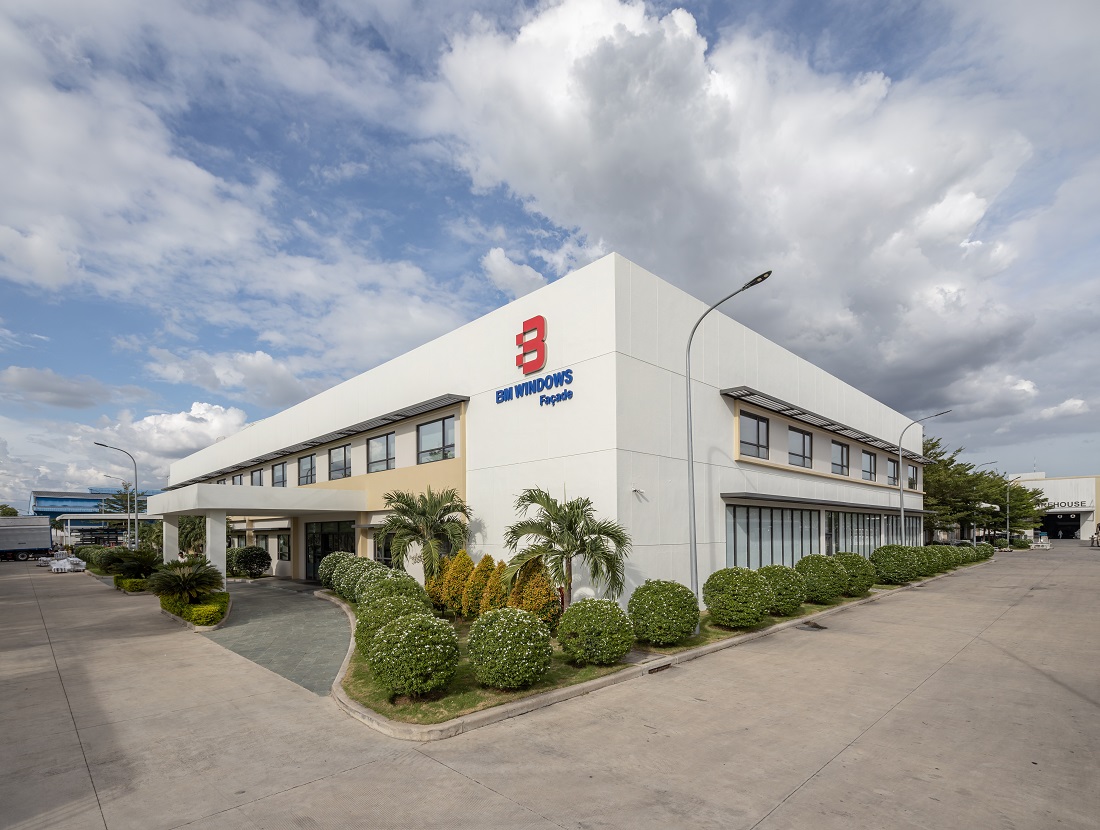 With its professional knowledge, sincerity and responsibility in each project, BM WINDOWS has cemented its position as a prominent domestic aluminum glass façade contractor, contributing to the strong development of Vietnam’s modern urban areas.