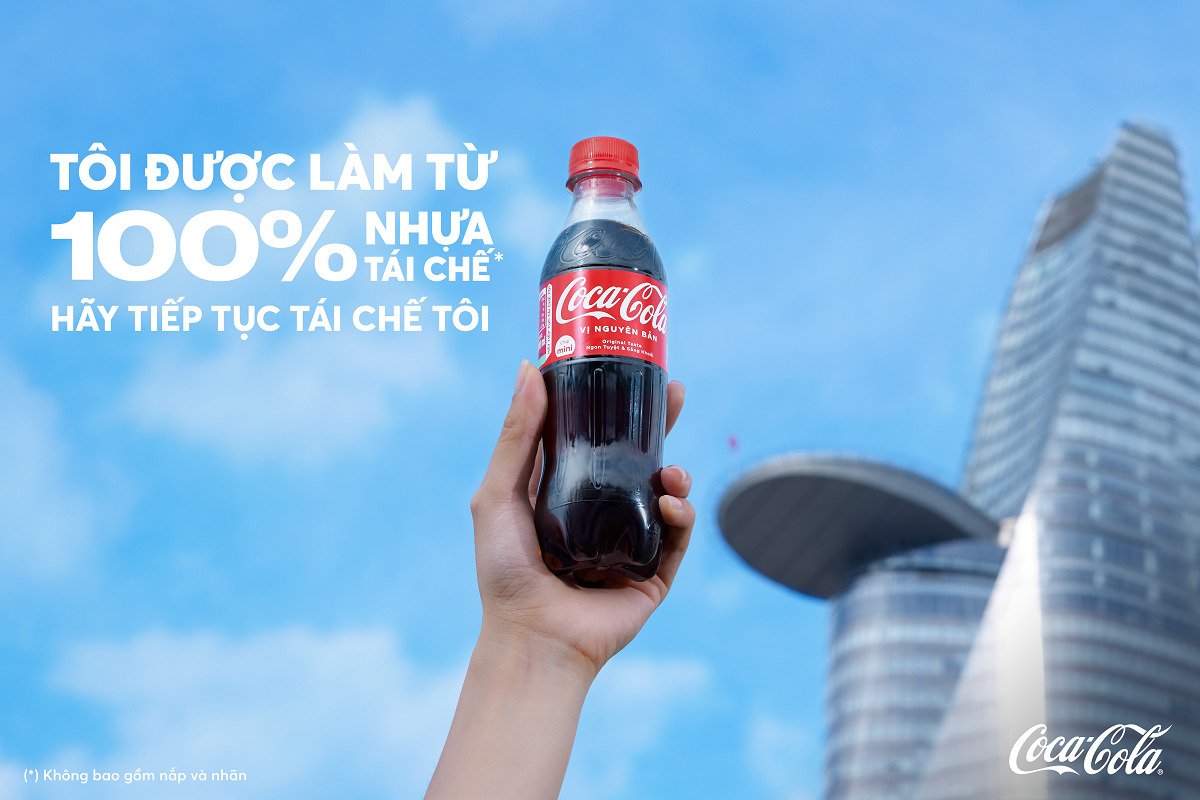 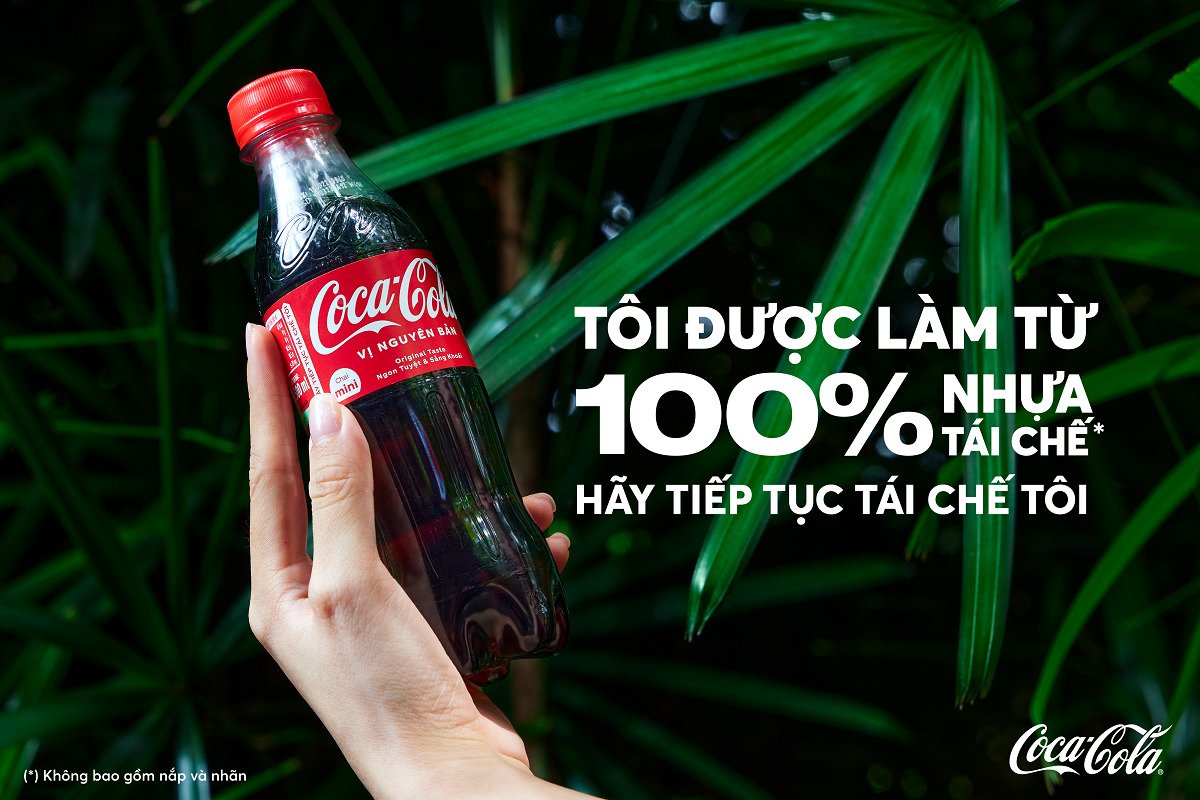 By introducing COCA-COLA™ bottles made from 100% rPET*, the company expects to cut use of around 2,000 tonnes of new plastic in Vietnam annually.

The new rPET packaging will debut this September for bottles of COCA-COLA™ Original and COCA-COLA™ Zero Sugar including 300ml bottles, and offers the double benefit of convenience and sustainability for on-the-go consumers in Vietnam.

This announcement is a significant step for the Coca-Cola system in Vietnam to grow its circular economy vision and help bottles become another bottle. The safety of the new recycled PET (rPET) plastic packaging has been thoroughly reviewed and complies with Vietnam regulations and The Coca-Cola Company’s strict global standards for food-grade rPET packaging. Consumers around the country can expect the same refreshing taste of COCA-COLA™ in a more sustainable package. 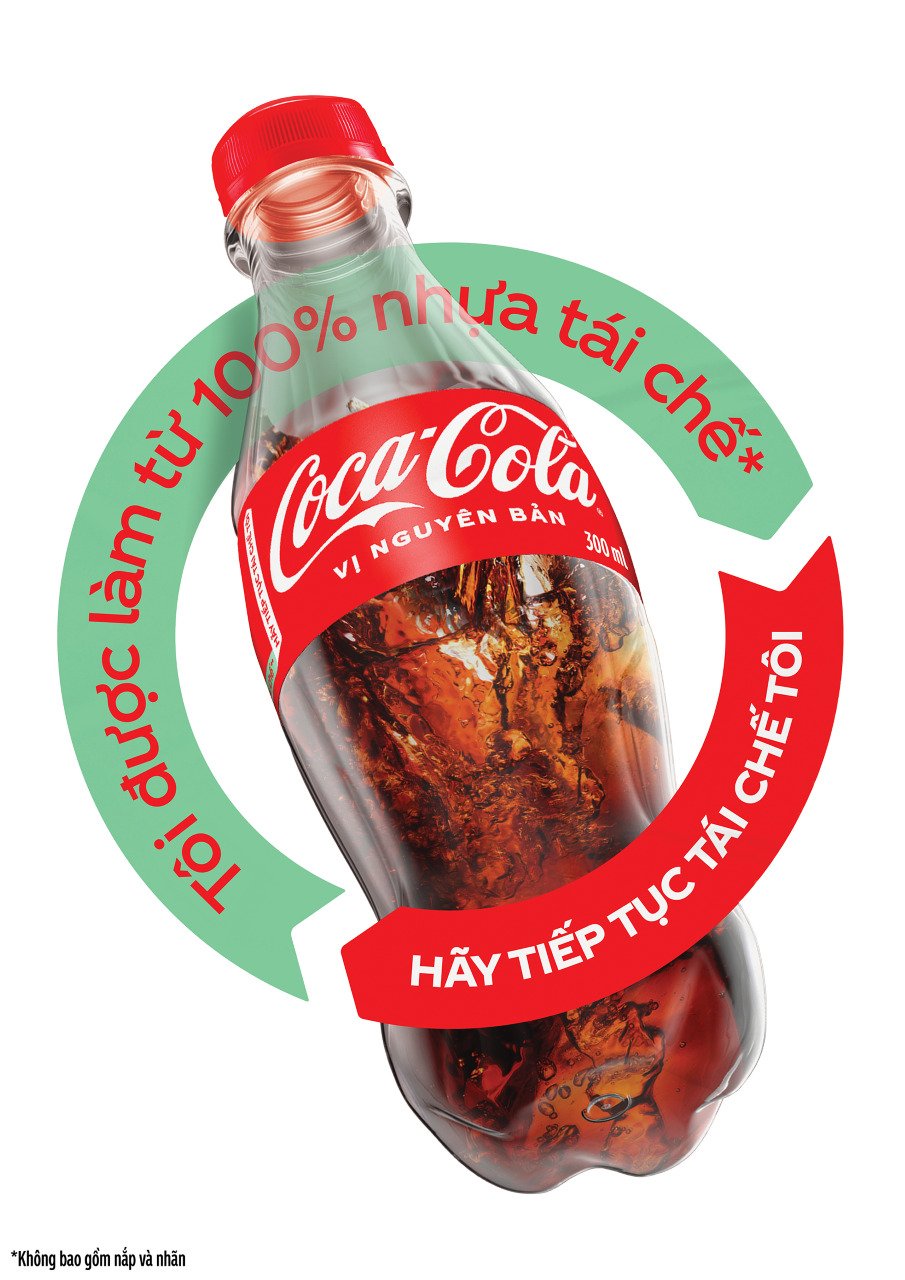 “PET plastic bottles have value beyond their first use and can be used over and over again. Our new bottles made with food-grade rPET are recyclable, and can become another bottle,” said Peeyush Sharma, CEO of Coca-Cola Beverages Vietnam Limited Company.

The Coca-Cola Company has a global World Without Waste vision to collect and recycle the equivalent of every bottle and can it sells by 2030. But it’s not just about collecting and recycling bottles, it’s also about using less virgin plastic. As such, the company has a global goal to use at least 50% recycled content in its packaging by 2030. The Coca-Cola Company now offers 100% rPET bottles* in more than 30 markets around the world.

“We want to ensure that all our bottles have more than one life, in support of a circular economy in Vietnam. To achieve this, it is critical we have enough supply of food-grade recycled plastic to meet demand. This is why Coca-Cola Vietnam, together with our bottling partner, are also investing in the collection and recycling of PET plastic bottles,” shared Leonardo Garcia, General Manager of Coca-Cola Vietnam and Cambodia. 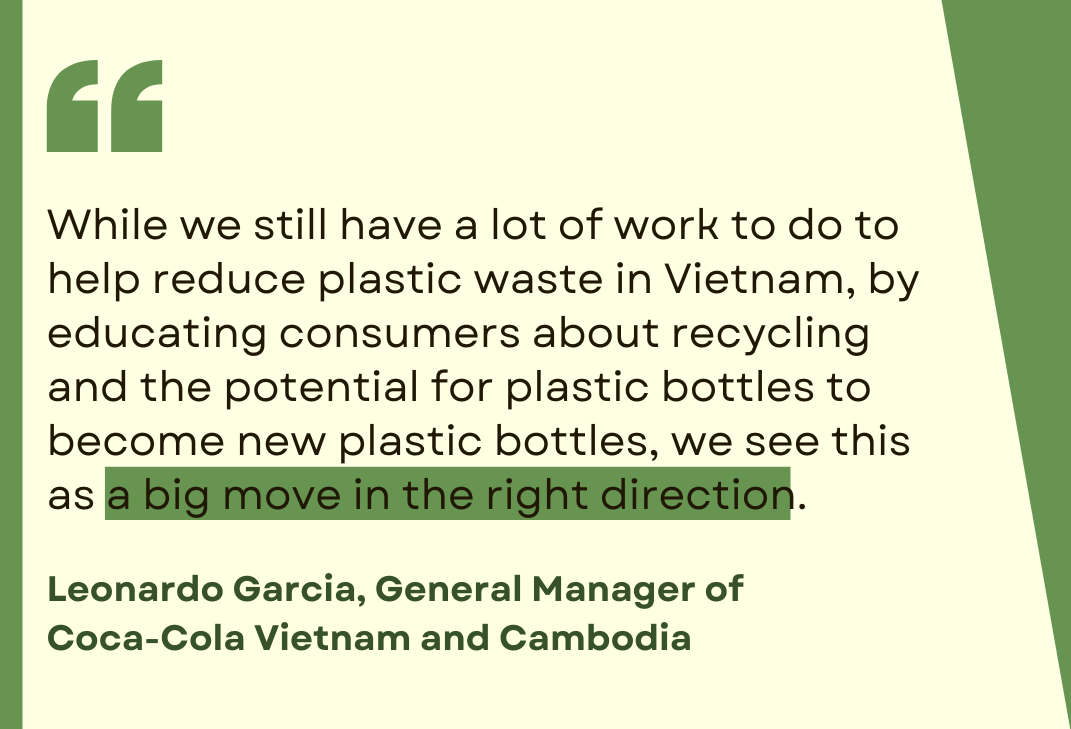 To build awareness and encourage action on recycling, last year Coca-Cola rolled out a prominent ‘Recycle Me’ message across all its packaging in Vietnam. SPRITE also transitioned and replaced its iconic green bottles to clear packaging in Vietnam in order to give the bottles the best chance of another life.

“We also can’t solve this challenge alone, which is why we are collaborating with partners, governments and industry to help us scale solutions and make our packaging more sustainable,” said Mr Garcia. 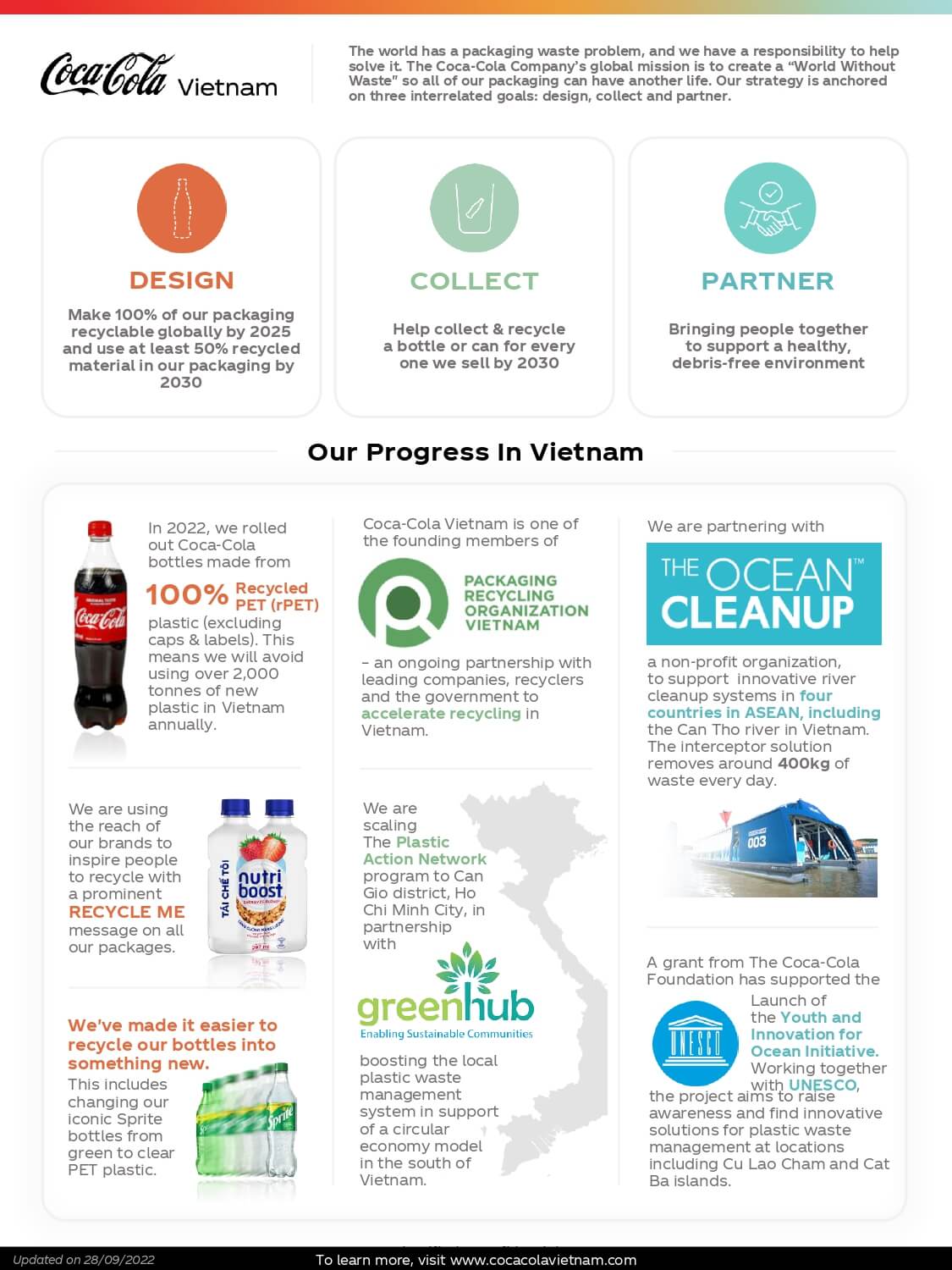 Since 2018, Coca-Cola Vietnam has been working with partners such as the Centre for Supporting Green Development (Green Hub) and local recyclers to support and incentivize informal plastic waste collectors who are the backbone of the recycling industry in Vietnam. With support from The Coca-Cola Foundation, the company is furthermore partnering with UNESCO in their programs to raise community awareness and find innovative solutions for plastic waste management at Cu Lao Cham and Cat Ba islands since 2020.

Coca-Cola Vietnam is one of the founding members of Packaging Recycling Organization (PRO) Vietnam, a partnership with other leading companies, recyclers and government agencies to accelerate local packaging collection and recycling in support of a clean and green Vietnam.

“Coca-Cola Vietnam is one of the pioneering companies that is working to build a circular economy for packaging. They have been actively working with partners respectively to support ways to collect and recycle their bottles so they can have another life. This is an ambitious goal and it shows the company’s readiness to deploy Extended Producer Responsibility (EPR) for plastic packaging. I would like to congratulate them on their introduction of the new 100% rPET bottles today, marking a milestone for Coca-Cola Vietnam’s sustainability journey in the country,” said Mr. Phan Tuan Hung, Director General Department of Legal Affairs, Ministry of Natural Resource and Environment. 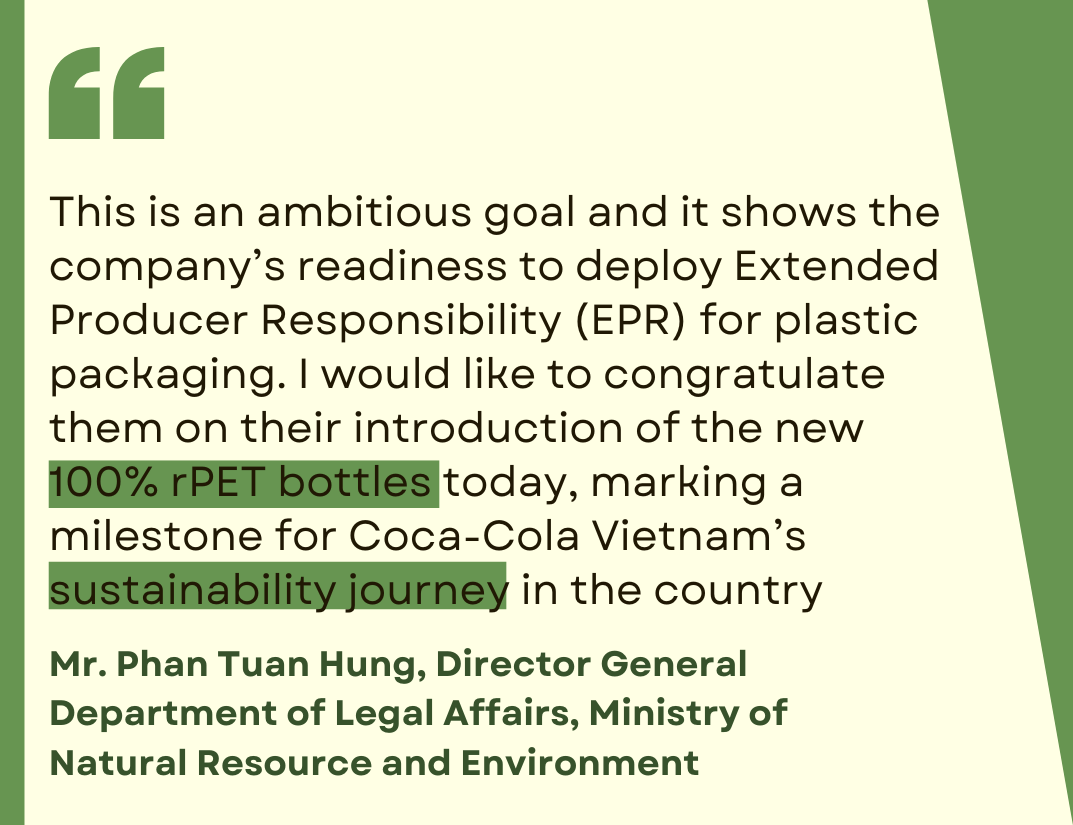