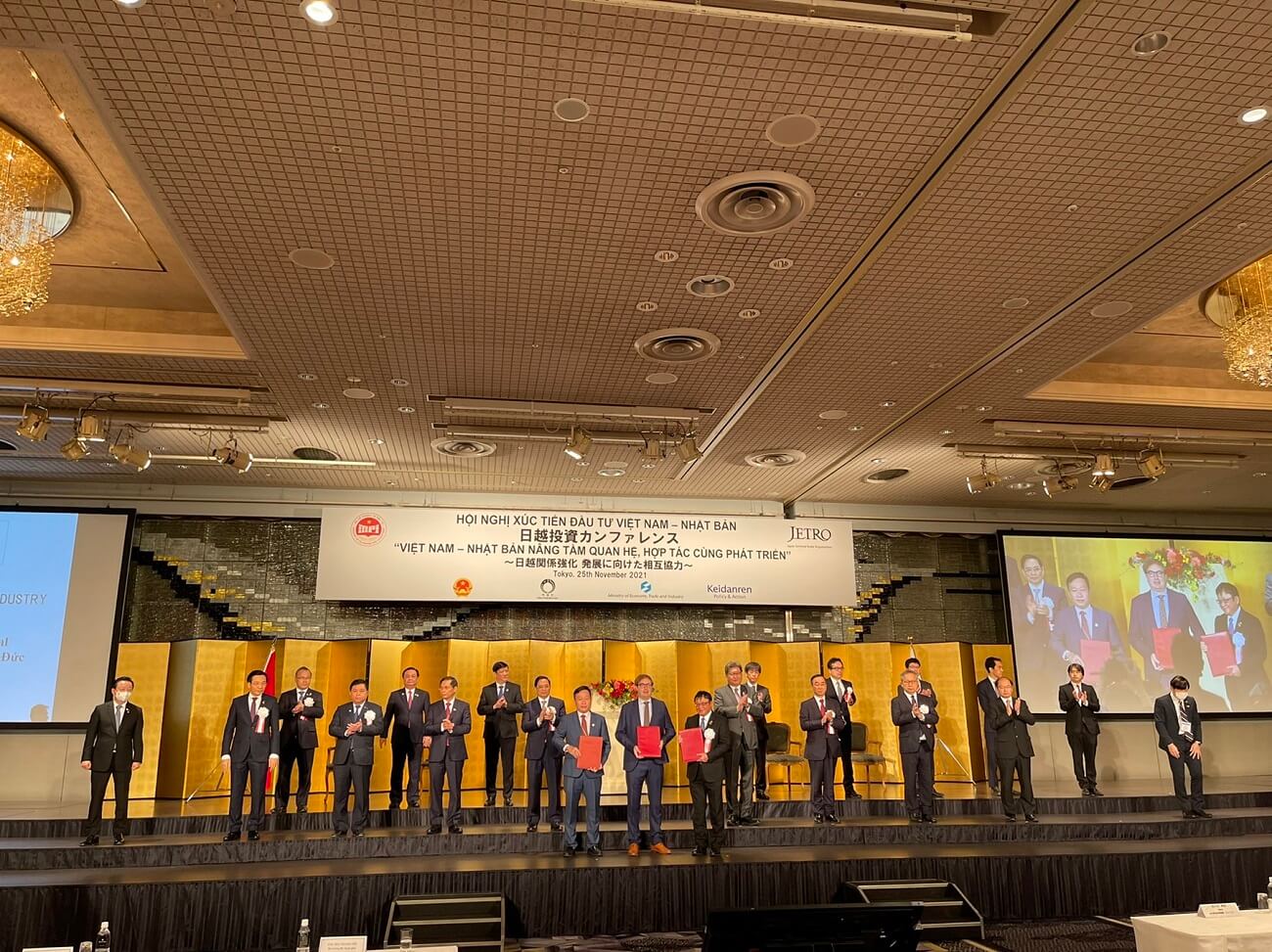 On November 25, within the framework of the Investment Promotion Conference held in Japan, under the witness of Prime Minister Pham Minh Chinh, Hong Duc Industry JSC., part of DEEP C Industrial Zones, Bamboo Capital Group and Sojitz Corporation signed a Memorandum of Understanding (MoU) on on the three-party cooperation to develop an industrial park project and ancillary infrastructure services with expected total investment capital of approximately US$250 million.

Under the agreement, DEEP C Industrial Zones together with Bamboo Capital Group and the Sojitz Corporation will cooperate to develop an industrial park project and rooftop solar power as well as ancillary infrastructure services in the northern region of Vietnam.

DEEP C is a cluster of industrial parks and seaports developed and operated by the investment holding Infra Asia Investment Hong Kong (IAI, majorly owned by Belgian company Ackermans van Haaren), in Hai Phong City and Quang Ninh Province – the most dynamic development area of Northern Vietnam. Over 24 years of establishment and development, DEEP C has established its position as one of the most prestigious industrial zone developers in Vietnam. Up until now DEEP C has attracted over 140 secondary investors in various manufacturing and logistics services, with total registered capital of US$4 billion. DEEP C is now operating 5 industrial zone projects with a total area of 3,400 hectares, supported by synchronized infrastructure network and reliable utilities and services. The potential to develop rooftop solar network on factories and workshops in DEEP C Industrial Zones is very promising and part of the sustainability vision developed by the company.

Bamboo Capital (BCG) is a Vietnamese multi-industry corporation, with strong focus in the field of renewable energy. BCG Energy, a subsidiary of BCG is one of the pioneers in development of renewable energy in Vietnam. Today, BCG Energy owns over 500 MW in solar energy capacity and aims to reach 1.5 GW generation capacity in 2023.

The third partner joining DEEP C and BCG is Sojitz Corporation (Japan). Sojitz, one of the largest multi-industry corporations in Japan, appears in the Forbes Global 2000 list. With nearly 440 subsidiaries and branches across Japan and 50 countries and regions globally, Sojitz focuses on the field of automobiles, manufacture of machinery and equipment; metal, energy; chemicals and industrial infrastructure, as well as the fields of agriculture – forestry – fishery and consumer goods, etc. Sojitz Corporation is one of the Japanese pioneers investing in the Vietnamese market since 1986, as well as the first foreign independent power producer with the Phu My 3 Power Plant project in Ba Ria – Vung Tau. In addition, Sojitz has a number of investment projects in industrial park infrastructure, afforestation and timber production and trading in Vietnam.

The agreement between DEEP C, BCG and Sojitz will create synergy from each party’s strengths, aiming to develop together the Industrial Park project and ancillary infrastructure services, including rooftop solar systems as well as to conduct research into other types of green energy and storage, so as to ensure the supply of clean and stable electricity for the Industrial Zones operated by DEEP C.

All three parties, DEEP C, BCG and Sojitz, have set the target to develop the first industrial zone in Vietnam that is fully energy independent by enhancing the generation and consumption of renewable energy. This collaboration will not only bring economic benefits to DEEP C, BCG and Sojitz but also contribute to reducing emissions, moving towards carbon neutrality and sustainable development of Vietnam in the future.