Don’t be tentative about wind power!

Instead of shutting the door to or being hesitant about wind power or other sources of renewable energy, the Ministry of Industry and Trade should study and build a comprehensive plan to step by step tackle the bottlenecks which are hindering the growth of these sources of clean energy. Such a move will also contribute significantly to Vietnam’s sustainable development.

Local authorities across Vietnam have to date registered for 110,000MV of offshore wind power which should be included in Vietnam’s national master power plan. Therefore, it came as a surprise when during the conference on “Development of Offshore Wind Power for the Future of Vietnam’s Clean Energy” hosted by the Central Economic Committee, Deputy Minister of Investment and Trade Dang Hoang An said the ministry is considering the inclusion in the Eighth Master Power Plan of some 5,000MV by 2030 and 40,000MV by 2045. These amounts are far below the registered wind energy capacity.

Later at the same meeting, Nguyen Tuan Anh, vice head of the Electricity and Renewable Energy Authority (EREA) under the Ministry of Industry and Trade (MIT), explained the reason for the inclusion of only 5,000MV of offshore wind power. The wind energy market is quite new and subject to the power grid’s capacity, according to Mr. Anh. “By 2030, only a small amount [of offshore wind power] is included so that the improvement of the transmission power grid system can be carried out, and appropriate policies and mechanisms can be formulated to suit the offshore wind power sector,” he said.

The argument that it must take time to enhance the transmission network and come up with comprehensive policies and mechanisms while disregarding a highly potential source of clean energy and forcing investors in offshore wind power projects to wait until 2045 is hardly acceptable although even MIT representatives have confirmed that it is a very good source which can gradually supersede power generated from fossil fuels (coal-fired electricity).

The weakest point of wind power as well as solar energy is their instability because electricity can be generated only when winds are strong enough. However, it is now only a technical problem which can be solved. Consequently, the remaining issue is how to cut costs.

So far, according to the draft of the Eighth Master Power Plan, over the next two or three decades, Vietnam will still mainly rely on coal-fired power plants to meet her power thirst because the authorities concerned contend that coal-fired power is cheaper.

Obviously, for years, the policy on exchanging environmental effects for cheap power has been in place here. However, it is not a wise choice if we take into account the benefits of future generations. Nor can this policy be extended forever as residents in affected areas have raised their voice increasingly strongly and pressure from the international community is compelling Vietnam to cut her carbon footprint. At the 26th United Nations Climate Change Conference (COP26), Prime Minister Pham Minh Chinh pledged that Vietnam would reduce her carbon emissions to zero in 2050.

To fulfill that commitment, what Vietnam should do right now is to accelerate the growth pace of clean energy sources, such as wind and solar power. Obstacles relevant to power transmission grids and policy implementation should be cleared as soon as possible instead of having to wait for decades as indicated by the statements made by a representative of the EREA mentioned earlier in this article. 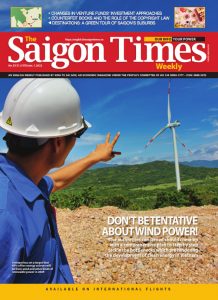 The biggest stumbling block in this regard in Vietnam relates to power unit prices. As a side note, Vietnam’s electrical power retail price level is low only for customers that are industrial manufacturers. It is not too low for household use and is already rather high for the service sector.

The retention of low power unit prices for the industrial sector over the past decades is unfair to both households and the service industry. Furthermore, it has unwittingly inspired the import of obsolete machinery as well as equipment, and has promoted investments in power-intensive industries producing low added value. The same policy turns out to be now a serious impediment to the development of clean power.

Therefore, instead of shutting the door to or being hesitant about wind power or other sources of renewable energy, the MIT should study and build a comprehensive plan to step by step tackle the bottlenecks which are hindering the growth of these sources of clean energy. Such a move will also contribute significantly to Vietnam’s sustainable development.