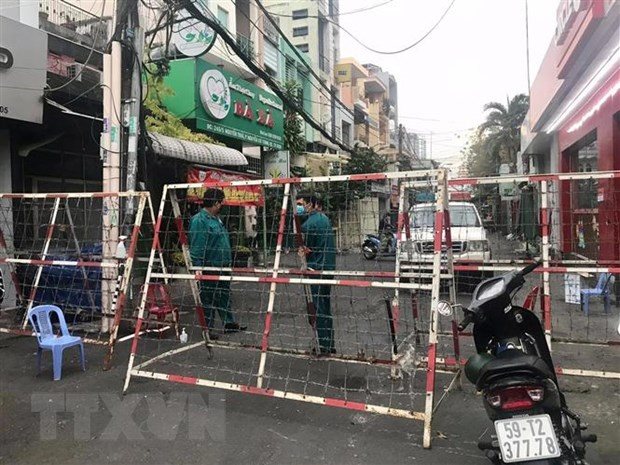 HCMC – The central Government has signaled that HCMC can take more aggressive measures such as lockdowns to stop the spread of Covid-19 as new daily cases in the city and its neighboring provinces have continued to surge.

A Government Office statement issued yesterday said Prime Minister Pham Minh Chinh made clear that the trajectory of Covid infections in HCMC is still unpredictable and the disease had begun spreading to a number of provinces surrounding HCMC.

More aggressive measures must be adopted to prevent Covid from spreading, stressed the PM.

Even though the city later on issued stronger restrictions on social mixing as indicated in Directive 10, new daily infections have kept escalating, with the number of Covid positive cases in HCMC from April 27 to July 6 amounting to 7,385.

PM Chinh called for the public to sympathize with HCMC and other provinces to take measures such as large-scale lockdowns and restrictions on social mixing, according to the Government Office statement. But he noted these measures should have minimal impact on people’s lives.

When lockdowns, including large-scale ones, come into force, local authorities must speed up testing to detect and isolate carriers of coronavirus as soon as possible to prevent community spread.

PM Chinh told HCMC to focus on fighting the disease now and take tougher measures when applying the prime ministerial Directives 15 and 16 on Covid prevention and control but the city should take responsibility for whatever it does.

“As the country’s economic center with many industrial parks and big factories, (HCMC) should practice prudence and caution, and consider the order of priorities because any strong anti-pandemic measures will interrupt production and supply chains,” said the statement.

Deputy Prime Minister Vu Duc Dam, who is also head of the national anti-Covid steering committee, said in a teleconference with HCMC yesterday afternoon that the city would have to take stronger action to stop Covid from spreading.

The social distancing order has been in place for five weeks but there is little sign of community spread abating.

Deputy PM Dam said, “HCMC must join hands and get ready for a tougher life in a short period of time so that it could get back to normal.”

There are currently more than 14,000 people put under mandatory quarantine at state-run isolation centers and over 37,000 others self-isolating at home.