In recent months, the number of tours for meetings, incentives, conferences and exhibitions (MICE) has increased significantly, promising a quick recovery in the segment following the Covid-19 pandemic. This has encouraged travel companies and destinations to roll out attractive programs to bring back travelers.

A vibrant summer season has dawned on the local tourism market. Since February, many travel companies and event organizers have welcomed MICE guests, with groups amounting to thousands of people. The MICE segment brings more revenue than others, and thus the rosy growth in the segment is bringing about positive sentiment among travel companies.

Vietravel Company said it received 150 groups with some 9,000 MICE guests in February, in which there was a group with as many as 2,000 people. Most visitors came for team-building activities and a gala dinner on Phu Quoc Island, at Ho Tram and Long Hai in the southern province of Ba Ria – Vung Tau, Phan Thiet in the south-central province of Binh Thuan and Dalat in the Central Highlands province of Lam Dong. The company said as planned, there will be 220 groups with some 11,000 people on a MICE tour in March, with guests from many big companies.

Saigontourist Travel Company also organized a MICE tour for 720 people from Hanoi to Danang from March 9 to 12, one of 80 MICE groups with 13,000 guests that the travel company has planned to serve this month.

Some other companies are also expecting MICE groups, though the size of the groups is smaller, with fewer people and fewer high-end services.

Tran The Dung, general director of Fiditour – Vietluxtour Travel Company, said last month, the company had to postpone some tours as some people in the groups were infected with Covid. In March, the situation looks better as travelers are much calmer amid the ongoing pandemic. “When there is someone in a group diagnosed with the disease, guests prefer delaying for a short time and then restarting the tour as soon as the situation is stable. This helps us better organize tourism services,” Dung said, adding that many companies booked tours just a short while before their trips to minimize risks that may occur due to the pandemic.

Recently, the Saigon Exhibition and Convention Center (SECC) in HCMC’s District 7 was busy with events. The center used to be a venue for events hosting as many as thousands of people. It is now witnessing smaller events organized with hundreds of people, sometimes even just dozens.

“It’s still good to see the market move after a standstill,” said Thuong My An, general director of SECC.

An said companies organizing events tend to trim off services, leaving out reception parties and snacks during breaks. They are also prone to booking the venue not long before the event and combining online and offline meetings. And so the center has been forced to install more facilities to meet the demand.

In the past, travel companies and management agencies would compete to attract MICE guests. Now, destinations have begun to join the game.

Among localities, HCMC and Danang appear to be more active with incentive programs such as offering gifts, lowering ticket prices and shortening the time to issue licenses.

Last year, Danang piloted a favorable policy for big MICE events and saw positive results. Within two months – from March 15 to April 30 and December, the city witnessed 10 groups with 4,000 MICE guests, in which there were groups with as many as 500 people. 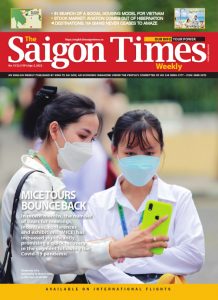 This year, Danang continues to implement preferential policies for MICE guests from February till the end of the year for groups from 50 to 700 guests. Depending on the size of the events, groups will enjoy welcome ceremonies, souvenirs, communication events and support ticket prices at destinations. Moreover, a group of 700 MICE guests will be welcomed by the city’s leader. At present, many MICE tours in Danang are seeing big groups with over 700 people each.

Like Danang, HCMC too is offering preferential policies for MICE tours and foreign business associations when organizing events in the city. The HCMC Tourism Promotion Center said besides gifts, MICE groups from 300 to 1,000 people would be greeted by leaders of the city, of the tourism department and of the center, depending on the size of each MICE group.

Recently, the HCMC Department of Tourism signed a memorandum of understanding with the European Chamber of Commerce in Vietnam (EuroCham) to promote tourism in the city. The department and EuroCham will focus on promoting MICE, cuisine tourism and market research. Through the deal, HCMC will be popularized as a must-visit destination for visitors from Europe and elsewhere, boosting the city’s tourism recovery.

Some companies said MICE is a typical tourism segment, requiring not only the capacity of travel companies but also infrastructure facilities as well as a dynamic economy and adequate policies. Therefore, it would be more effective if local management agencies joined hands to promote destinations to attract travelers, instead of letting travel companies do it themselves.

“We need to push the MICE tour segment, which will make HCMC different from other localities. HCMC needs to reevaluate the market and manpower, as well as further cooperate with localities to develop the tourism segment,” said Vo Anh Tai, deputy general director of Saigontourist Group.