Post-pandemic debt and castles in the sand

Many people have had to visit gold shops and pawnshops where they can convert their gold and other assets into cash after social distancing measures are eased in HCMC. This highlights the risk of post-pandemic debt.

Consumer loans and the “buy first, pay later” trend are on the rise in many countries, attesting to increasing financial risks facing the public, especially the low-income group after the pandemic.

In the second quarter of 2021, the Bank of England unveiled a report showing that some households, especially the 20% with the lowest income, had to rely on risky loans without collateral (which means the interest rates imposed were high). This report warned that the income of those tapping into consumer loans fell by 20% in the second half of 2020 and more than 10% in the first half of 2021, far more than those with housing loans. By virtue of limited savings, those with risky loans face many problems when debt obligations balloon.

This trend may recur in Vietnam, especially after the period of stringent social distancing in the southern part of the country. The media is replete with articles on workers who, saddled with debt during this period, take the risk to return to work in HCMC. They reflect the financial struggle of many people, especially the low-income group. The fact remains that some must borrow money to do business, only to see their income evaporate during the pandemic. The debt incurred when they try to buy a motorbike to join Grab, a ridesharing company, or test for Covid-19 has become a burden for many. Worse, some do not dare to return to their home provinces due to protracted unemployment and rampant debt.

Some may say nobody has starved. This cold-hearted observation shows a lack of understanding of how a modern economy operates. While nobody has died of hunger, many are in the red and will struggle for years to escape from the vicious circle of escalating debt. 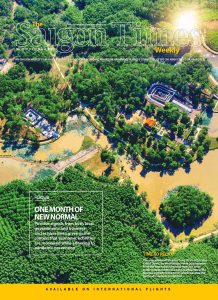 The percentage of people in dire straits has surged since southern provinces started to tighten social distancing in late April. According to the General Statistics Office, the number of people 15 years old and above who hold a job in the third quarter of 2021 was 47.2 million, down 2.6 million from the previous quarter and down 2.7 million year-on-year. The percentage and number of people who are underemployed within this age range hit a 10-year record high in the same quarter.

Consequently, income has plunged. The average monthly income in the third quarter was VND5.2 millon, down VND877,000 (down 14%) quarter-on-quarter. Like in Singapore and the U.K., job losses, dwindling income and rising debt are pressing problems.

This leads to two worrying trends.

First, those losing their jobs or income will find it hard to pay their debt. Default risks will rise. Do credit institutions offering consumer loans set aside enough provision against this problem? While some pawnshops and credit institutions offering consumer loans posted staggering profit in the first year of Covid, there remain risks. Besides, has such profit taken into account future risks? These are questions that can only be answered in the future.

The State Bank of Vietnam (SBV) has just released a report on the implementation of Resolution 124/2020/QH14 by the National Assembly on the socio-economic development plan in 2021. According to the report, as of June 2021, if restructured debt was included, bad debt had reached 7.21%. It remains unclear how much of that pertains to consumer loans. However, the fact that the amount of bad debt is twice as much as that before Covid-19 is alarming.

Second, assuming consumer loan providers continue thriving, that means they have new sources of revenue and profit. These may be sustained by those who borrow from different sources, sometimes more than they can pay. Apart from official channels, informal channels for loans still exist. Risks abound in the latter channels and may force those in debt to pull out all the stops to tackle their problems. The debt bomb may eventually explode, possibly because of loans via informal channels, which are not tightly controlled.

Excessive borrowing that surpasses payment capabilities and the “buy first, pay later” trend have triggered global warnings, especially to young people. Who will benefit? The answer is probably not borrowers. New credit platforms, sometimes in conjunction with cryptocurrencies and Decentralized Finance, are emerging. Deals which call for capital worth tens or hundreds of millions of U.S. dollars have proliferated, supported by a fast-growing industry with many overnight millionaires. However, they also engender a system of personal loans with escalating risks, as well as a group of people who constantly borrow to finance existing debt and, in the process, generate growth for this system.

Castles in the sand will eventually collapse.

(*)Lecturer, University of Bristol, the U.K.