Budget collection efforts made in 2021 have reached the finish line one month ahead of schedule. And the total balance gains a surplus worth more than VND120 trillion. However, instead of being a harbinger of wealth or high growth of the economy, the surplus reflects a rather significant risk, that is exponential price hikes recorded in many industries.

The State Budget Department under the Ministry of Finance has recently announced the State budget collection during the first 11 months of 2021 was estimated at VND1,389.2 million billion, or 103.4% of the year’s plan and an increase of 8.9% over the same period of last year. A further breakdown shows that central State budget reached 98.5% of the year’s target while local State budget obtained 109.5%.

In principle, taxes are levied on price level or nominal income (which means income calculated in accordance with a monetary unit). As soon as price level increases, the collection of indirect taxes/fees, such as value-added tax (VAT), will rise correspondingly. For instance, a commodity whose pre-tax price is VND100 will be subject to a VAT payment worth VND10 if the tax rate is 10%. And in case the pre-tax price is VND120, then the VAT payment will be VND12. Similarly, when nominal income rises, the collection of direct taxes/fees, such as personal income tax, will be proportionally higher. In addition, the progressive calculation of some taxes—for instance, personal income tax—will cause the collection of taxes to rise faster than the growth pace of nominal income.

Vietnam’s growth of gross domestic product (GDP), or real income, during the first nine months of 2021 inched up merely 1.42%, and the figure for the whole year is projected at 2% at most. Which means that economic operations are moving at a snail’s pace. In the meantime, State budget collection has soared unexpectedly. If there have been no sudden changes in State assets, the year’s early accomplishment of State budget collection can be explained only by price hikes. Prohibitively high prices of commodities across industries have spurred sales and profit of enterprises even when their production was lower.

In that sense, the collection of VAT, export tax, excise tax, corporate income tax and so on has increased, too. The rise in payrolls of workers in these aspects have boosted the collection of personal income tax. Particularly, the dramatic surge in prices and transactions of assets (for instance, real estate and stocks) have also pulled along the proportionate rise of taxes and fees levied on the asset transfers involved. 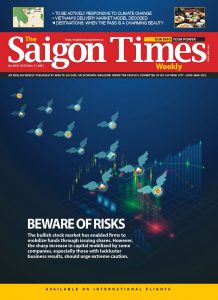 Notably, after the first 11 months of the year, the most impressive amounts of collection were from industries where price hikes were remarkable. Take crude oil for example. In defiance of exploitation declines, collection from crude oil was estimate at 164.2% of the plan. Or higher prices of land and houses following the banking sector’s interest cuts helped collection from real estate reach 121.6% of the plan; collection from public land fund and revenue from other public assets attain 171.1% of the plan; and personal income tax payments reach 107.9% of the plan. In total, 50 out of 63 cities and provinces across the nation attained more than 95% of the year’s projection.

In most economies, governments are often those who are the “happiest” while payers feel their most acute pain when prices soar. Price hikes will not only lead to a decline in real value of public debts (because debts lose their value) but also increase nominal value of collections, such as taxes and fees.

In the backdrop of an economic slump, price hikes will enfeeble purchasing power on the one hand. On the other, they will put a heavier burden on almost all people and enterprises. This suggests that measures to be undertaken to support the economy in the future, if any, should be focused on tax and fee reduction, particularly of commodities that play the key role in input factors of production and whose prices have already soared, such as fuel and materials used in agriculture, manufacturing and construction. Such policies will help cut costs, stimulate production and minimize the risks of inflation for the entire economy.