As the military conflict in Ukraine heats up, commodity prices are spiraling up and this spike shows no signs of abating. Inflation has been haunting many economies, and now the situation is going from bad to worse.

Vietnam’s average consumer price index in the first two months of the year grew 1.68% year on year. The impact on consumer prices may spread slowly, but the target CPI of 4% for this year looks increasingly unobtainable.

In the first week of March, the global prices of many commodities spiked up, especially the energy group, with the coal price surging 75% and crude oil 32%. The group of farm produce also followed suit, with wheat rising 35% in price, corn 12%, milk, butter and sugar all going up 8%.

In the United States, the January inflation rose 7.5% year on year, which was the highest since 1982, while the eurozone inflation in February was 5.8%. In the current context, higher prices of energy and other input materials may push inflation out of control.

Groups of commodities like energy, housing and foodstuff always carry a major weight in the basket of commodities used to calculate inflation. Given the higher input prices, therefore, consumer prices can hardly be sustained.

More worrisome still, when consumer prices go up, the demand for a pay rise will also get more acute. The minimum wages in certain countries have been revised up, and the demand for higher wages is also heating up. Risks associated with the price-wage-price cycle are surfacing in many countries. In France, for instance, some trade unions have taken to the street demanding a pay rise for employees. 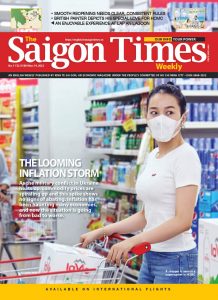 Data from the General Statistics Office (GSO) shows the CPI in the first two months of the year at 1.68%, with transport service posting a rise of 15%, foodstuff 2.37%, and drink and tobacco 2.48%. As groups of dining-foodstuff, housing-building materials, transport, and household appliances account for a major share in the basket of commodities for CPI, any rise in the prices of these groups will have a major impact on this year’s inflation.

Furthermore, a breakdown of Vietnam’s imports also implies a strong influence on the CPI. For example, Vietnam imported iron and steel worth up to US$11.76 billion in a year to January, and products made of iron and steel US$5.2 billion. These commodities will impact on housing and building material prices to a larger extent.

Vietnam also imports a sizeable amount of animal feed and materials, with the latest data showing a value of US$4.91 billion; automobiles at US$4.89 billion; crude oil at US$4.82 billion; oil products at US$4.11 billion; pharmaceutical products at US$3.99 billion; and corn at US$2.98 billion. All these commodities have a strong influence on the prices of the local basket of commodities, and as such, the steep rise of global prices will adversely affect the import prices in the coming time.

Reality shows that many global suppliers and traders have adjusted their contracts or orders signed with partners. For those contracts already signed, they may be forced to go through such deals and incur damages. For new contracts, the valid period for offered prices will be shortened, say, from one month to a week. Provisions in the contract can also be amended to factor in the fluctuation of material prices.

The knock-on effect of rising prices may be relayed, but given the connectivity between markets, the relayed has also been shortened. Moreover, as market information is instantly updated, psychological factors will affect prices ahead of time. Accordingly, enterprises will hold back commodities, while consumers will stock up on goods as a hedge against rising prices. The herd manner in many cases will aggravate the situation if management agencies fail to give clear and consistent messages.

The impact on consumers varies from one family to another due to different levels of income and spending, but low-income earners will feel the pinch. Their savings can be erased when prices surge.

Statistical figures often come late and fail to mirror the current situation. Only individual families and consumers can tell how inflation bites by measuring the amount of goods and services they can buy with the same amount of money.

The inflation in the coming time can be scary, though statistical figures cannot clarify it. More dangerously still, when inflation skyrockets and prolongs, the economy will gradually turn dimmer, ushering in tough macroeconomic policies.