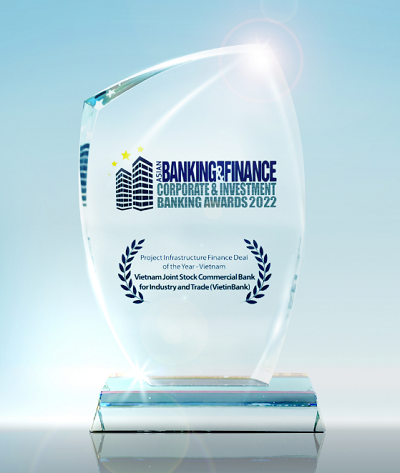 With the surge of foreign capital inflow and rapid expansion of the economy in Vietnam during recent years, VietinBank has stood out as a pioneering bank in financing major projects focused on improving existing infrastructure in Vietnam, thus fostering the country’s economic growth towards sustainable development.

Remarkably, in August 2022, VietinBank was given the prestigious award “Project Infrastructure Finance Deal of the Year” at The Corporate and Investment Banking Awards 2022 hosted by The Asian Banking & Finance for its significant financing deal regarding the expansion project of a leading modern industrial park in Vietnam – which is expected to draw in a huge amount of foreign investment and create thousands of new jobs in a pivotal emerging economic zone of Vietnam.

This deal affirms the strength of the strategic relationship between VietinBank and one of the leading foreign-invested industrial developers in Vietnam, built on the past successful projects in industrial infrastructure. VietinBank also reinforced its position as a leading local bank for FDI enterprises and achieved its goals in facilitating the country’s development via efficient capital allocation for major infrastructure projects.

This is underpinned by the bank’s capabilities and track record in providing large-scale credit facility and fund arrangement service for corporates as being one of the largest local banks in Vietnam, owning an extensive network with 155 branches nationwide and having correspondent relationship with over 1,000 financial institutions across the globe. More importantly, with the establishment of dedicated teams serving customers of various countries (such as Chinese, Japanese, Korean Desk) and the strategic relationship with MUFG Bank, the bank has always been a major partner of prominent FDI enterprises operating in all sectors in Vietnam, being known for its ability to provide corporate customers with a suite of financial and banking services tailored to their sophisticated requirements and evolving needs across the entire business lifecycle.

Furthermore, in light of rising global demand of ESG initiatives, VietinBank already deployed the inclusion of tighter social and environmental assessment criteria during credit appraisal stage for project financing and prioritization of projects that support the national sustainability goals, including development projects of green industrial parks and logistics services as a launching pad for Vietnam to attract high-quality foreign investment and bring about positive impacts on its socio-economic development.