This year may be expected to be the pivotal time in which the gradual switch to normalcy in Southeast Asia may happen.

In general, 2021 came to a close when the economy of the Association of the Southeast Asian Nations (ASEAN) showed several positive statistical data. Malaysia’s exports rose by 34.9% in November 2021 over the same period last year, marking the 15th consecutive month it had posted a positive growth rate since September 2020. Statistics released on December 29, 2021, show Malaysia’s exports surged more than 25% overall in 2021. At the same time, Singapore’s exports in November 2021 also generated a 24% growth rate, the highest leap during a decade.

Expectations of a return to normal growth

Another optimistic figure relates to the better-than-expected economic growth achieved by many ASEAN economies versus the common forecast of the Asian Development Bank (ADB). For instance, Singapore posted a growth rate of 7.2% after plunging by 5.4% in 2020.

These encouraging growth figures may to a certain extent mirror the strong rebound of Singapore’s economy following the catastrophic effects of the Covid-19 pandemic in 2020. Although the Q4-2021 growth became slower due to the emergence of Omicron, more than 40% of her population have already received the booster dose, enhancing observers’ confidence in the island state’s brilliant performances this year.

In the meantime, Vietnam posted a growth rate of only 2.58% in 2021, even lower than the 2.9% level in 2020. However, Vietnam’s economy is forecast to generate a rate between 6% and 8% this year, varying with forecasting institutions. Their rates have a tolerance ranging from minus 0.5% to plus 0.5% versus the 6.6% rate given by the International Monetary Fund (IMF), and are higher than the average forecast of 5.1% for ASEAN provided by the ADB.

These projected indicators mean the international institutions expect ASEAN’s economic growth in 2022 will come back to the trajectory it made in 2019, which is the pre-Covid-19 “normalcy.” However, will it be back to that normalcy?

This is the fundamental question. In principle, when a country obtains full vaccination, her economy may respond normally to the conoravirus which causes Covid-19.

However, in several ASEAN countries, international mobility has yet to become normal again. Regulations on social distancing, health isolation and testing have become more stringent since the last days of 2021 when the new Omicron variant forced thousands of flights to be cancelled a day.

The fear of the coronavirus is still lingering in the people as well as the authorities across ASEAN, including the burden of responsibility. As long as international flights still aren’t smooth and supply chains get stuck somewhere, a complete normalcy in the first half of 2022 is not easy. This will become affirmative if another dangerous variant does surface.

Therefore, the expected economic recovery of the ASEAN economic community depends critically upon the balance between pandemic fighting policies and the economic recovery of each country. It is not difficult to shut down the economy to keep the virus from spreading wild. Nor is a country’s isolation from the outside world. Nevertheless, how to help the people and industries avert the possible consequences is a different story. Economic stimulus packages cannot be extended forever and banks’ bad debt cannot be rescheduled indefinitely.

The year 2022 started with record highs of Covid-19 infections in quite a few countries. However, in contrast with the transition between 2020 and 2021 when New Year’s Eve was incredibly quiet, the transition time between 2021 and 2022 was jubilant in many countries in defiance of rising numbers of infections. It was partly because governments felt it unnecessary to request their citizens not to gather at big events because despite the surging contractions, the number of hospitalizations and the death toll remained low or were even apparently at its peak and declined in some European nations. For instance, the Financial Times published data showing that the worst which had been feared did not happen in Britain during the first days of the new year. According to representatives of the National Health Service (NHS), the number of hospitalizations was gradually declining in London, one of the top centers of the pandemic in Europe, instead of rising sharply as previously predicted. “Hospitals have yet to receive senior patients with severe symptoms,” said Chris Hopson from NHS.

This can be a positive sign, and it may be a sign that either virus variants are losing their intoxication or vaccines have started their real effects. It may be as well the expected community immunity has been created because of the climbing number of patients. Or more painfully, a remarkable ratio of the most vulnerable had passed away.

Whatever the reason is, the author believes that there are grounds for the hope that ASEAN’s economies will be back on track in 2022, albeit not completely. That’s why a forecast of an average growth rate of 5% for the entire ASEAN may be attainable. 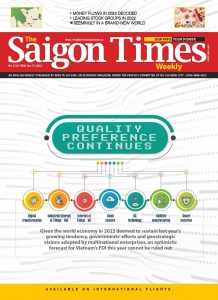 If ASEAN’s economy can recover in 2022 to be in form again as mentioned above, will inflation surge proportionately? This is the next question that causes worries to many after they have witnessed a situation in which growth triggered the highest inflation rate in 2021 over the past 20-30 years in the United States and Europe.

When it comes to forecasts, institutions like the IMF and the ADB still project inflation at 3% for developing economies in Asia, including the

ASEAN. Basically, inflation is expected to rise higher than in 2021, but it will not be at 7-8% or a two-digit rate feared by some. That prices of crude oil and other commercial commodities have been kept stable or declined from the peak gives us a reason to be optimistic. Another reason comes from the fact that the disruption of Asian supply chains is improving, which will alleviate the inflationary pressure on a global scale. When aid packages are withdrawn, for instance in the U.S. and Europe, and fiscal packages are becoming invalid, inflation in developed countries will fall and thus allay the anxiety that inflation in Asian developing economies will soar.

However, despite the potential, it is still tough to avoid risks that during some peak months, inflation will surge dramatically, especially when the economic recovery pace exceeds supply chains’ ability to meet its demand during the path to normalcy. The discrepancy contributed to the escalation of the prices of some consumer goods in Europe last year, and may do the same in ASEAN economies during their economic recovery process.

What really matters is the responses given by agencies that formulate monetary policies. Hasty responses when it is not clear whether price hikes are temporary will pose a risk of a too early monetary crunch. Yet a belated reaction may force one to be in the defensive side just like the current case in which the U.S. Federal Reserve is criticized. As economies remain weak following a severe illness, they should receive support from fiscal and monetary aid packages. However, high inflation will attack the poor first and brings instability to these people’s livelihoods. Balancing all these policies is a formidable challenge. However, it is a must do this year.

This year may be expected to be the pivotal time in which the gradual switch to normalcy in Southeast Asia may happen. During such a process, unpredictable hurdles are bound to happen (which is sometimes called “unknown unknowns”). However, policies can be formulated to cope at least with known unknowns. Inflation and pandemic outbreaks are indefinite. However, they can be predictable to a certain extent, which should prompt nations to build contingency plans. A good or bad government in ASEAN can be seen clearly by how it manipulates things during this process.

(*)Lecturer, University of Bristol, the UK