The dollar-dong exchange rate has regained stability after the U.S. Federal Reserve slowed its interest rate hikes. This has allowed the State Bank of Vietnam (SBV) to restart buying foreign currencies.

What signals has the SBV sent?

The SBV, on December 15, announced it would buy the U.S. dollar for VND23,450 after not listing the price for virtually three months. On September 7, the central bank ceased its regular purchase of U.S. dollars while sharply increasing the dollar selling price by VND300 to VND23,700.

The U.S. dollar buying price has surged by VND900 compared to the figure quoted on September 6. The increase came unavoidably as the selling price swung up firmly by VND1,470 in September and October, increasing by 7.04% (VND1,630) over the beginning of the year, while the buying side rose by 3.53% (VND800).

The move was made after the Fed raised its benchmark interest rate by half a point to the highest level in 15 years in mid-December, taking it to a targeted range between 4.25% and 4.5%. As analysts predicted, the increase broke a string of four straight three-quarter point hikes, confirming the world’s financial powerhouse’s commitment to slowing the pace of interest rate hikes.

In addition, developments in the local forex market have been de-escalated and stabilized since November. As of December 19, the dong-dollar exchange rate dropped steadily to VND23,645 per dollar, down VND20 over early December, following a decline of VND30 in November.

After a sharp increase in September and October, the SBV steadily revised the U.S. dollar selling price in over a month, with five cuts on November 11, 18 and 25 and December 9 and 16. In particular, the price dropped slightly from November 11 to December 9, at VND10 for each cut. However, the figure increased 5-fold to VND50 on December 16, bringing the total reduction to VND90 after five adjustments.

Banks’ quoted prices have also seen continuous drops from early December to last week, amounting to VND1,200 in both selling and buying directions. Likewise, the buying price on the free market dipped to VND23,975, down VND1,375 over its peak at VND25,350. The selling price dwindled to VND24,035, down VND1,415 over its highest point in early November, at VND25,450.

The stop to buying dollars over the past three months was attributed to liquidity strains on the forex market, causing the central bank to be unable to purchase while forcing it to continuously sell the currency to meet the market demand.

Hence, a stabilized global foreign exchange market, driven by the Fed slowing its monetary tightening process and tensions on the dong-dollar exchange rate being alleviated, was the cause of the SBV’s repurchase of the dollar. It may also hint that the central bank will resume its buying activities in the coming time.

Figures released by the General Statistics Office (GSO) showed that Vietnam posted a trade surplus of US$0.78 billion in November, bringing the total surplus in the year through November to US$10.6 billion, way higher than the figure in the same period last year, at US$0.6 billion. With a boost at the year’s end, exports may bring in US$11-12 billion this year.

Meanwhile, GSO’s data suggested that foreign direct investment in 11 months was estimated at US$19.68 billion, up 15.1% year-on-year and hitting a five-year high. Coupled with a strong surge in remittances in the last month of the year, the country may post ample foreign exchange reserves.

Besides, though the Fed is expected to raise its interest rates by another 0.75 percentage point in 2023 and the tightening cycle is projected to peak at 5.1%, the U.S. central bankers may reconsider ahead of recession risks in the year, especially when they have officially decelerated their interest-rate hikes in the recent meeting.

Thus, it is possible that the U.S. dollar will not strengthen against other currencies in the coming time. In addition, the USD Index at the start of this week only hovered around 104 points, down over 9.4% compared to its peak at 114.8 points in late September.

Meanwhile, Vietnam’s bank deposit rates have escalated recently. Many analyses pointed out that the volatility of the dong-dollar exchange may not keep up with the current differences between the deposit rates of the dong and the dollar, even if the exchange rate swings up again. Therefore, the idea of holding foreign currencies and depositing the amount at banks to enjoy the benefits of exchange rate fluctuations and interest rates may continue to spread among people.

Based on these grounds, foreign reserves during the year end and early 2023 should grow strongly, enabling the SBV to resume buying foreign currencies and improve its reserve, especially after the central bank had to sell a huge amount of foreign banknotes in the second and third quarters, and the first half of the fourth quarter to stabilize the forex market. Updated figures showed that the nation’s forex reserves plunged to US$89 billion by the end of August, down US$21 billion over late 2021. 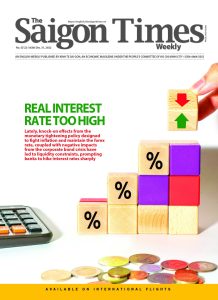 The cap for forex trading between banks is equivalent enough to bring the bank’s foreign currency status to the square position.

Thus, given that the foreign currency supply is ample and may outnumber demand, coupled with the continuation of U.S. dollar regular purchases, the SBV’s move to reduce the U.S. dollar buying price should be deemed as reasonable under current circumstances, as it will help central banks to cut down on costs for rebuilding its foreign reserves.

It also reflects the SBV’s flexible policy based on the market conditions under a specific period while avoiding one-way interventions for a long time, which may lead to the risk of being accused of currency manipulation by the U.S.