With expectations for a robust economic recovery this year, many enterprises have set ambitious growth targets despite the inflation pressure and a possible interest rate hike.

The recent developments in the real estate market have encouraged property enterprises to complete projects and put them up for sale this year, thereby increasing their revenue and profits.

Typically, Bamboo Capital Joint Stock Company set a pre-tax profit target for this year at VND1.5 trillion, soaring 148% over last year due to the profit from the Malibu Hoi An project and shophouses of Hoian d’Or. In addition, the company has launched projects in Binh Dinh, Dak Nong and Quang Ngai provinces.

After a significant growth rate of 327% last year, the Khai Hoan Land Group Joint Stock Company (KHG) is expected to reach its highest ever pre-tax profit growth of 90% to VND983 billion. The company will continue completing procedures to increase its land fund to over 1,000 hectares in and outside HCMC and expand cooperation with investors with significant land funds.

Meanwhile, Khang Dien House Trading and Investment JSC expected its after-tax profit to hit an all-time high of VND1.4 trillion this year despite a growth target of only 16%.

Additionally, No Va Land Investment Group Corporation will seek its stakeholders’ approval for net revenue and after-tax profit targets of nearly VND36 trillion and VND6.5 trillion this year, respectively, jumping 141% and 88% over the figures recorded in 2021. The group will continue developing 24 projects in Dong Nai, Binh Thuan, Khanh Hoa, Ba Ria-Vung Tau and HCMC and is expected to hand over 22 projects. The company has also planned to develop housing projects in the eastern area (HCMC’s Thu Duc City) and resort projects in Binh Thuan, Ba Ria-Vung Tau, Lam Dong and Khanh Hoa.

HCMC Infrastructure Investment JSC, after incurring losses of VND341 billion in 2021, expected its after-tax profit to surge to VND757 billion thanks to the profit from the divestment from its subsidiary-NBB, the sale of treasury shares and the recovery of the BOT sector.

Among the industrial park developers, Kinh Bac City Development Holding Corporation (KBC) is leading with its profit target in 2022 with an expected pre-tax profit growth of 474% to VND4.5 trillion, thanks to the revenue from the sale of 30 hectares of the Trang Cat urban area project.

With new public investment projects this year and real estate projects under construction, construction enterprises have also been optimistic about their profit this year. For example, CIENCO4 Group Joint Stock Company looked to earn VND3 trillion in revenue and VND300 billion in profit, rising 1.5 times and three times over the figures in 2021, respectively. The State’s acquisition of the BOT Thai Nguyen-Cho Moi project this quarter will help CIENCO4 take back some VND1 trillion. 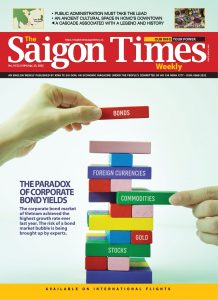 Banking is among the sectors that posted positive profit growth.

Despite the growth being lower than that of real estate enterprises, banks’ profits may reach trillions or tens of trillions of Vietnam dong—a huge increase in profit.

Seafood firms have also captured public attention this year as they have set high profit targets given their expectation of a global economic recovery thanks to the control over the pandemic, the reconnection of supply chains and benefits from free trade agreements. For example, Vinh Hoan Corporation is expected to earn a consolidated revenue of VND13 trillion and a net profit of VND1.6 trillion, up 43.5% and 45.5%, respectively, against last year.

I.D.I International Development & Investment Corporation has planned to fetch VND8.3 trillion in net revenue this year, increasing 45% year-on-year, while its after-tax profit was expected to rise 6.6 times to VND900 billion. Nam Viet Corporation’s profit this year was also targeted to surge as their tra fish has been exempted from the anti-dumping tax in the United States in the 16th period of review.

Retail is also among the sectors which will bounce back once the economy recovers and returns to normal. Of them, Mobile World Investment Corporation set its revenue target at VND140 trillion and after-tax profit target at VND6.35 trillion, rising 14% and 30%, respectively, over the figures recorded in 2021. The corporation has also planned to sell 20% of charter capital at Bach Hoa Xanh.

Phu Nhuan Jewelry Joint Stock Company is expected to earn more than VND25.8 trillion in revenue and VND1.32 trillion in after-tax profit, up 32% and 28%, respectively, over last year.

Regardless of challenges, such as the inflation pressure and a possible interest rate hike, these enterprises mentioned above have remained optimistic about and confident in their profit plans this year. This will be a driving force for the present stock price growth and in the coming periods if enterprises ensure the progress of their plans.

On the other hand, steel, fertilizers and oil firms, despite being forecast to benefit from the escalating goods prices, have set low growth targets as many of them involve State ownership, so their leaders have been cautious while setting targets over the past few years. Similarly, securities firms have set modest targets, although the market has been predicted to continue growing positively after many firms in the sector reported record profits last year.