Some 20 years ago, HCMC was the only area prone to flooding as it was situated at the end of large rivers, a basin that receives a vast amount of water and was affected by the rise of the sea level.

Some 10 years later, Hanoi, a city located in the heart of the Red River Delta with a view full of rivers and mountains, also began suffering floods every summer. During the historic flood in 2008, Hanoi took five days to return to normalcy.

By 2012, according to the observations of Dr. Ho Long Phi and the enCity Consulting Company, dozens of cities across the country had been flooded. From the seaside areas favorable for drainage such as Vinh and Nha Trang to plateau areas such as Dalat, Son La, and Buon Ma Thuot are all unaffected by the tide, but also share the same fate.

How do you explain this phenomenon? What is the root of the problem? In the June Midnight Talks program, Dr. Ho Long Phi identified six main factors that cause flooding—urbanization, the loss of a permeable surface, hydrological changes, upstream floods, ground subsidence, and the rising sea-level.

In HCMC, water does not reside in the city but has a clear foreign origin. This place is the end point of the Saigon-Dong Nai River basin. The water from the entire basin flows to HCMC and pours into the southern sea. HCMC has an area of some 2,095 square kilometers, but the affected basin has an area of 40,000 kilometers, some 20 times larger than the city. HCMC’s problem can’t simply be seen from the city but has to be observed from a wider view instead.

The topography of HCMC has many disadvantages as the north and the center are higher while the south and west are lower areas. The hydrological regime of HCMC is very complicated due to the interlaced canal system.

Dr. Phi analyzed that flooding in HCMC comes from four external factors and three local ones. The city may be affected by floods from the Tri An Lake, the Dau Tieng Lake, the Mekong River, and the rising sea level. The three local factors are heavy rain, urban subsidence occurring on a large scale and urbanization causing loss of permeable surfaces and natural flows.

Compared to other cities with the same situation, the expert concludes that urbanization has lost the permeable surface, and natural flow is the main cause of flooding in urban areas. As a result, flooding occurs in well-drained seaside and plateau areas unaffected by tides.

Where there is development and urbanization first, flooding will also come first.

When urbanization occurs, people displace water and relocate it elsewhere, erasing the permeable surface significantly. In the past, these were places where water was absorbed or stored, but now it has become houses and buildings. Phi also noted that there were many flooded spots that still persist but we didn’t pay attention to them because they didn’t cause any damage. Today, when the urban area expands there, it gets damaged and only then are the flood points recorded.

In addition to the loss of permeable surfaces, urbanization also causes the disappearance of natural flows and divides the basin into many new ones. It is quite important that urbanization creates a much larger runoff than in the past. Replacing canals with sluices is one of the major causes that destroy the natural flow and affect the water.

During this time, the water level of the rivers in HCMC also rises clearly, with rainwater levels increasing over time.

The rate of the water level rising per year (highest tide) increased steadily at the Phu An, Thu Dau Mot and Nha Be stations. Meanwhile, the Vam Kenh station’s estuary’s speed increased slowly. “Why is the rate of the sea-level rise smaller than river water? While the impact of climate change is present, it is only a small part of the problem. These internal factors increase the rate of river stations, which is a very interesting question,” Dr. Phi stated.

The doctor analyzed that it is the process of urbanization that causes subsidence, complicating the problem even more. The underground aquifer is exploited, causing the soil layer to be moved underneath. Dr. Phi’s calculation showed that the subsidence rate in HCMC is three times higher than the rate of sea-level rise. The two factors of subsidence and sea-level rising together worsen the flooding situation. With the current rate of groundwater exploitation, the highest subsidence rate can be up to 2.5 centimeters/year if no control measures are taken. Some 300 years from now, HCMC might be 2-3 meters below sea level, just like the Netherlands today. 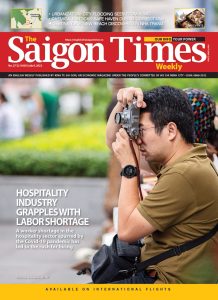 What to do in these uncertain conditions?

The currently applied technical solutions are mainly anti-flood structures designed according to the past and forecast frequency. With an uncertain future, Dr. Phi believes there must be a different approach to the problem of anti-flooding.

“Is it necessary to prevent flooding if it does not cause damage?” the expert asked. When it comes to minimizing the damage caused by flooding, the government can expand solutions instead of just investing in anti-flood structures. At that time, the solution to the flooding problem will be more diverse, with more parties involved.

Instead of preventing floods, he believes that flood damage should be controlled by minimizing flooded subjects and increasing flood resilience, starting at the household level for the fastest recovery.