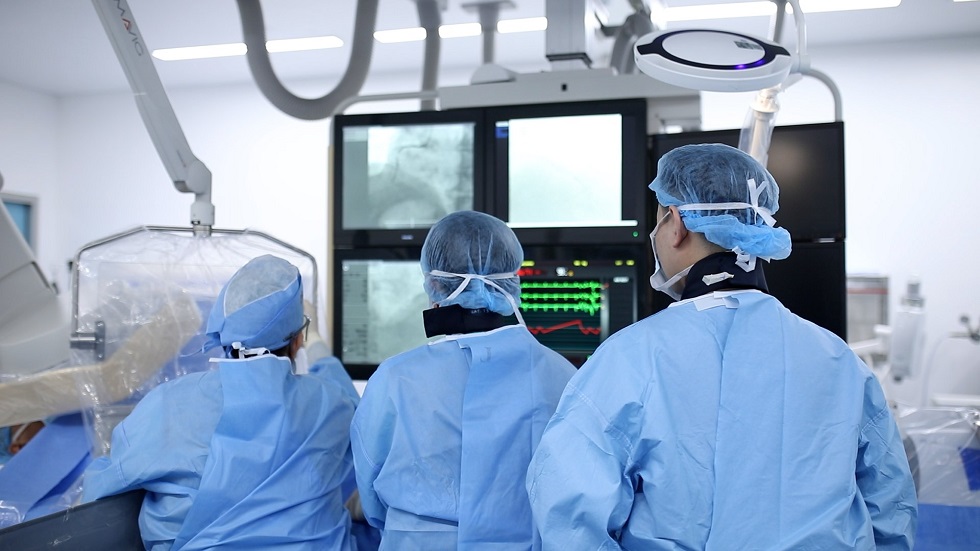 Mr. Dominique Caillaud (68 years old, a French man living in Thao Dien, Thu Duc, Ho Chi Minh City) suffered a heart attack in the middle of the night when he had no one around. Before fainting, he was able to open the door so that people outside could enter to give him first aid.

The General Director of FV Hospital living nearby, after receiving the news, rushed to give first aid and worked with the emergency team and the cardiologist of FV Hospital to save the patient’s life within 2 hours.

Save the heart-attack patient in the evening at lightning speed

At midnight on December 2, 2022, Mr. Pierre Desouche (French nationality) received an urgent call from his friend Dominique Caillaud: “I’m going to die”. Mr. Pierre Desouche immediately called his friend who was nearby, Dr. Jean Marcel-Guillon, General Director of FV Hospital. Immediately, the doctor got into the car to save the man who was in a very serious condition.

When he went to the patient’s house in alley 216 Nguyen Van Huong Street, Thao Dien Ward, Thu Duc City, Ho Chi Minh City, everyone found Mr. Dominique lying on the sofa in a very bad condition: pale skin, breathing with difficulty; he was sweaty and cold, constantly complaining of severe pain in his chest with intermittent vomiting.

Dr. Jean Marcel-Guillon immediately consulted remotely with Dr. Ho Minh Tuan, Head of the Cardiology Department of FV Hospital. Thereby, he quickly determined that the patient had a heart attack and had a high risk of death. The General Director of FV Hospital immediately called an ambulance to Dominique Caillaud’s house. While waiting for the ambulance, Dr Jean Marcel-Guillon gave first aid to the patient and immediately mobilized a multi-specialty team to be ready for the emergency.

At FV Hospital, Mr. Dominique Caillaud had his vitals measured, set up an intravenous line and checked his heart. Through the rapid test of heart enzymes, the doctors found that the heart muscle was severely necrotic due to lack of blood supply. Immediately the patient was taken to the Cathlab room for coronary intervention. Here, from the medical records and test results, the patient had a myocardial infarction due to 3-vessel stenosis – this case needs urgent treatment within 72 minutes after receiving treatment to save life and avoid possible unwanted complications.

After consulting again with General Director Jean Marcel-Guillon, Dr Ho Minh Tuan, Head of the Cardiology Department, correctly handled and successfully placed a stent to recanalize two large and important coronary arteries. The patient passed the critical attack, the chest pain was gone, the heart enzymes were no longer high, and the blood pressure was stable. Two days later, the patient recovered, walked normally and was discharged.

Mr. Dominique Caillaud shared this with the press before being discharged from the hospital. He recounted, that night when he was about to go to bed, he suddenly felt a sharp pain in his chest and gradually felt weaker and weaker. He called his friend Pierre Desouche to tell him the situation. The pain almost made him fall while talking on the phone. He tried to unlock the door and then tried to move back to the sofa and then lost consciousness…

When recovering from the stenting procedure, Mr. Dominique Caillaud feels very fortunate and grateful for the efforts of FV Hospital’s medical team, especially the enthusiasm of Dr. Jean Marcel-Guillon, General Director of FV Hospital. “If he hadn’t come that night, I wouldn’t be sitting here talking now,” recalled Dominique Caillaud.

Dr. Le Minh Duc, Department of Cardiology – who was on duty on the night of December 2, said that it was a blessing that patient Dominique Caillaud was saved and fully recovered from a heart attack. “The greatest luck was that this patient had an initial assessment from outside by a doctor who is the general director of the hospital and in close proximity to the patient at the time. He assessed this as a possible cardiovascular-related case that needed emergency. The emergency doctor who contacted the cardiologist on duty was me. The second luck is that I know this case well. When I looked at the file, I found that this case had a stent placed in the abdominal aorta also at FV Hospital. At the time, I also told the patient about the potential cardiovascular risk. The third luck is that the doctors on duty, me and the emergency doctor and Dr. Ho Minh Tuan, Head of the Cardiology Department, simultaneously started in-hospital emergency to handle the patient as quickly as possible,” said Dr. Duc.

According to Dr. Ho Minh Tuan, Head of the Cardiology Department, FV Hospital, if patient Dominique Caillaud were treated slowly, it would lead to 3 high risks: One is arrhythmia, causing the patient to die. Second, acute heart failure due to weak heart contraction, increased myocardial necrosis, and death. Third, in more severe cases, the heart is perforated, the mortality rate according to the world medical literature is 99.99%. “Due to the forewarning, gathering all the information – a very important thing for the patient – the team was prepared and the treatment time was also shortened, less than 2 hours compared to international standards, thanks to that, such good treatment results can be achieved,” said Dr. Ho Minh Tuan.