Gloomy outlook for exporters of aquatic products next year

Following the updated forecasts by some influential institutes like the World Bank, the International Monetary Fund, and the Organization of Economic Cooperation and Development, plus recent moves by the U.S. Federal Reserve, worries about a global recession are surfacing. Which signals should we take heed of, and how should we prepare ourselves?

Reasons behind the worries

The Russia-Ukraine war has shattered hopes of economic recovery postpandemic: the sharp rise of commodity prices, especially the energy price, has triggered high inflation in most economies. Many central banks have been or are raising interest rates in a hope to curb inflation, as seen in the U.S., the UK, Switzerland, Australia, Canada, New Zealand and many other developing countries.

In the U.S. in particular, the Fed on June 15 hiked the federal funds target rate by 0.75 percentage point and its interest rate by the end of 2022 is forecasted by 18 Fed members to reach 3.4%. The rate hike is sizeable in terms of both the margin and the ratio as the previous interest rate had been low. For example, the effective federal funds rate (EFFR) rose from 0.83% to 1.58%, meaning an increase of 90%.

In the context of a possibly steep inflation, and the continued disruption of global supply chains due to the zero-Covid policy in China, updated forecasts of the global economy have revised down the global GDP growth rate this year to 2.9% to 3.0% compared to the previous 4% given earlier this year.

But an economic recession is not merely induced by a GDP slowdown. It is also determined by other factors like the manufacturing index, goods in stockpile, the profit margin, unemployment, gross domestic income (GDI), consumer confidence, and viewpoints of policymakers and economists.

Findings from a recent survey conducted by The Wall Street Journal with 53 economists show the probability of a recession in the next 12 months at 44%, compared to 28% and 18% found in April and January, respectively. This is worse than the likeliness of 38% recorded in December 2007 when the global financial crisis began.

An economic recession often occurs when normal conditions turn excessive. This is manifested by the overly liberal support for economies during the pandemic in terms of both monetary and fiscal policies, resulting in huge deficits in the balance sheets of many central banks: nearly US$9 trillion at the Fed, some US$9.4 trillion at the European Central Bank, and US$5.5 trillion at the Bank of Japan.

Many enterprises that enjoyed advantages when supplying goods and services during the pandemic will struggle with falling revenues and thinner profit margins when support policies are cancelled and travel restrictions lifted. Many manufacturers of household or electronic products that benefited from support policies in the past two years are grappling with difficulties in 2022.

Excesses are also seen in the prices of multiple assets, from securities to real estate, and cryptocurrencies, which explains their collapses in recent times. The S&P 500 Index, for example, has entered the bearish territory, falling by more than 20% compared to early this year. 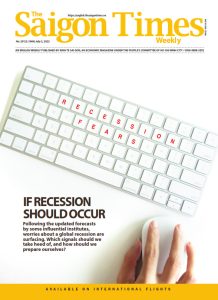 Bracing for the recession

The economy is cyclic, with expansion followed by contraction. If many negative signals surface, like the falling manufacturing index, rising stockpiles, thinner profit margins, unemployment, credit tightening, and sour consumer confidence, then the probability of a recession is very high. Upon such signals, only those enterprises that proactively scale down business, effectively control costs and maintain a minimum profit margin can survive the recession.

For securities investors, the market may witness wild swings in high volatility. Therefore, it is very risky for bottom fishers conducting all-in or frequent transactions. For those investors with a long-term investment plan, acquiring stocks for a suitable moving average price or inventory costing method can yield good results.

Taking a defensive stance when adjusting the portfolio is also helpful for investors before and during a recession. To do so, the portfolio should be diverse with different types of quality assets like bonds of high ratings and big-cap stocks with stable cash dividends.

Despite a recession is highly likely in the horizon, there are still narrow chances for soft landing. These include inflation being controlled and pushed down gradually, support from governments and central banks being directed to healthy companies instead of zombies, a peace accord to bring the Russia-Ukraine war to an end, and China quickly resuming business activities in the new normal.

Gloomy outlook for exporters of aquatic products next year