Is it time for REITs?

Real Estate Investment Trusts (REIT) were established in Vietnam’s assets legal system in 2012. However, questions remain behind their unpopularity among investors in the domestic market.

Real estate investment has recently stalled as credit growth limits have reduced banks’ loan access. Meanwhile, the bond market saw a significant drop following the adoption of Government Decree No. 65 in 2022, which prescribes private placement and the trading of privately placed corporate bonds in the domestic market, as well as the offering of corporate bonds in the international market.

At the same time, a new channel of capital mobilization has sprung up in the market, known as real estate purchasing under shared property ownership. Thanks to the initiative’s favorable mechanism, individual investors can put their meager funds into major properties.

The financing model has similarities with the REIT, which was earlier issued in the country’s legal frameworks. However, market observers still question why the REIT has yet to take off in the domestic market after years of implementation. 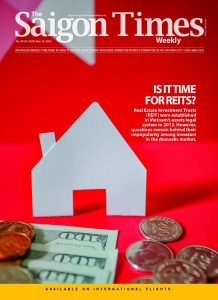 In particular, a real estate investment fund includes at least 100 investors and primarily makes investments in real estate and securities issued by enterprises, with at least 65% of revenue in their latest annual financial reports coming from real estate ownership and trade, according to the 2019 Law on Securities.

The fund’s operation is currently in accordance with regulations issued in the Law on Securities in 2019 and Circular No. 98 in 2020, among others.

More specifically, some 65% of the total value of the fund’s property must be invested in securities issued by businesses or in real estate for lease or use to sustain a fixed income. The other, which accounts for roughly 35% of the entire value, could be expanded to investments of deposits, Government debt instruments, listed stocks and bonds, among others.

By and large, fund operations are not authorized to participate in the development, building or implementation stages of any real estate project. The given progress carries risks and appears at odds with the fund’s initial objectives, despite its considerable potential for profits.

Moreover, the fund management company is required to map out a five-year detailed plan for its operations involving the use of properties. It should be noted that ownership of these assets must last for at least two years, except for other specific conditions.

The trust is indeed a public fund, which offers certificates to the public, as stated in the Law on Securities in 2019. The fund should thus be run by an authorized company with at least two qualified specialists in price appraisal and valuation.

In addition, fund trading activities are restricted between a maximum of 110% for purchasing and a minimum of 90% for selling compared to a pricing reference with six months of validity. Sometimes, the general meeting of shareholders will make important decisions on specific cases, including transactions that account for 20% or more of the fund’s total value following the deals and those that make up for 20% or above of the fund’s entire value with only a partner.

In short, the fund serves as a source of middle- and long-term capital mobilization for real estate firms. The initiative has demonstrated its effectiveness in many developed countries. As of 2021, some 865 REITs were listed in 40 nations globally, with a market capitalization reaching US$2,500 billion, according to the World Bank.

Currently, bank loans with short terms and high-interest rates are the primary source of real estate investment financing. In this regard, businesses are compelled to diversify their funding sources by issuing bonds and stocks. However, investors have faced obstacles due to a stock market stall and risks related to private placement of corporate bonds in the domestic economy.

The case of Vietnam

Although regulations on real estate investment funds were officially issued in 2012, such funds’ impacts on the domestic market have remained modest.

The tax incentives provided for the real estate investment fund may fall short of what investors had hoped for. For example, in the U.S., the United Kingdom (UK) and Japan, approximately 90% of the profit delivered to investors is tax-free, and the proportion is deducted from the tax obligation of the fund. Particularly for the UK, the revenue generated through domestic real estate leasing is not included in the fund’s tax liability.

Conversely, investors in the domestic market have yet to enjoy the given favorable benefits. That being said, a fund must pay a 20% income tax on real estate transfer transactions and a 20% tax on the income balance when it comes to stock investments. In addition, institutional investors are obligated to pay a 20% tax on certificate transaction revenue, while individual investors must pay a 0.1% tax on the selling price.

Additionally, investors may find the real estate market in Vietnam less enticing due to the industry’s low leasing performance. In particular, while the surplus value is largely produced during the project’s development phase, its edge may gradually diminish once the project is put into service. Given its sluggish growth, the early benefits of the project are likely to be outpaced by other avenues of capital mobilization, such as bank deposit profits.

For real estate developers, reducing investment proportions to spend on new projects is among the key priorities when searching for a capital-raising channel. However, if the project could generate an income comparable to the fund’s purchasing goal, REIT may not be the best option for real estate developers as the bracket appears to have a wide range of alternatives.

In addition to bank loans, and stock and bond issues, the real estate investment fund could effectively support businesses in capital mobilization efforts. Thus, it is essential for the Government to provide investors with favorable tax breaks to enhance the model expansion in the real estate industry. Potentially, the endeavor could channel social resources toward growth objectives while also dealing with financial and legal risks that may arise in the market.