Retail stocks, in general, are expected to produce positive business results this year, especially in the third quarter. On that basis, the current market correction may open up opportunities to accumulate stocks in this sector for those investors with a medium- or long-term vision.

With the downward trend of the VN-Index, many groups of stocks cannot avoid a short-term correction. Retail stocks are no exception, especially in June when inflationary pressure built up, sparking concerns about the profit margins of a “buy and sell” business like retail getting severely affected. Even so, as oil prices cool down, inflation displays signs of decelerating, and purchasing power gradually recovers thanks to the low base level of the same period last year, it is expected that cash flows will soon return to the retail industry.

Retail has regained its positive growth momentum in line with the spectacular recovery of the economy now that the Covid-19 pandemic is no longer rampant, leading to an increase in consumer demand, says Yuanta Securities Vietnam. As a result, retail stocks will benefit from the estimated market size of US$180-200 billion or more than 50% of GDP. Over the years, the retail sector has maintained an impressive growth rate of 1.5-2 times higher than the overall GDP growth. With such advantages as a large population (nearly 100 million people), household consumption making up 70-80% of GDP, significant economic growth, and per capita income constantly rising (US$3,560 in 2021, forecast to reach US$5,000 by 2025), the consumer retail segment in Vietnam has been holding a great appeal for both domestic and foreign investors, including ThaiBev, Central Group, Lotte Mart, Aeon Mall, Masan Group, and MWG, among others.

In addition to several major holidays, 2022 will have more plus points in the coming months when the Covid-19 “nightmare” has gradually diminished and economic stimulus policies begin to take hold. The drop in global oil prices, together with tax cut policies in an attempt to help gasoline prices at home maintain a downward trend during the upcoming price adjustments, will be one of the main factors to help ease inflation. It is forecast that the average consumer price index (CPI) of 2022 will be 3.5-4%. The GDP target is likely to be achieved with the Government stepping up the disbursement of its economic stimulus packages, including a 2% value-added tax reduction, an extra interest rate compensation worth VND40 trillion, and infrastructure investment worth VND113 trillion. GDP this year, therefore, will probably register a growth rate of 7-7.5%.

With stable macroeconomic fundamentals and high GDP growth so far in 2022, it is believed that the picture of the retail sector will contain multiple bright spots. MWG, PNJ, FRT, and DGW are the potential stocks of this industry currently listed on the bourse.

Up to this point, most retailers are confident they will accomplish their business plans for this year.

Specifically, FPT Digital Retail Joint Stock Company (FPT Retail, stock code: FRT) expects the retail industry will achieve considerable growth in the remaining months of the year, given the low base level of the same period in 2021. Retail sales are supported by factors such as rising per capita income, the unemployment rate on track to fall from the peak of 4% during the social distancing in the third quarter of last year, low prices in the second half of 2021, the remarkable recovery of tourism and related industries such as transport and accommodation services. Besides, the constantly changing distribution methods plus the application of technology will help the retail sector maintain an optimistic outlook. FPT Retail’s revenue mainly comes from three sources: FPT Shop (retail of mobile digital products), FPT Long Chau (pharmaceuticals), and F.Studio By FPT (trading in Apple products). The plan to expand the company’s network of retail outlets is still being implemented on schedule. FRT Retail is confident about attaining its goals for this year, particularly VND27 trillion in revenue and VND720 billion in profit before tax (in the first six months of 2022, the company earned nearly VND14.05 trillion in revenue, with a pre-tax profit of VND263 billion). 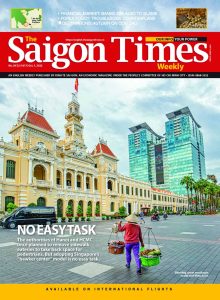 Meanwhile, Mobile World Investment Corporation (MWG), in the first six months of 2022, gained VND70.8 trillion in revenue and some VND2.57 trillion in profit after tax, up 13% and 1%, respectively over the same period in 2021. In July, the firm posted VND8.4 trillion in revenue, an increase of 16% year-on-year. Mobile World’s growth prospect in the second half of 2022 is forecast to be attractive, thanks to its retail chain of mobile devices, Dien May Xanh and Bach Hoa Xanh, etc.

As remarked by KB Securities Vietnam (KBSV), Vietnam is one of the countries where Apple focuses its investment, so authorized retailers of genuine Apple products will enjoy certain benefits. In particular, the launch of the iPhone 14 in the third quarter will be one of those factors stimulating revenue. In the first half of 2022, Apple products supplied to the market by Mobile World generated US$325 million in revenue. The company’s plan for the whole year is to reach US$750 million, up 67% against last year. It is predicted that Mobile World this year will achieve VND145.18 trillion in revenue and VND6.37 trillion in profit after tax, a rise of 17% and 30%, respectively, from 2021.

Thus, retail stocks are generally expected to produce positive business results this year, especially in the third quarter. On that basis, the current market correction may open up opportunities to accumulate stocks in this sector for those investors with a medium- or long-term vision.