While central bankers worldwide have yet to tighten their monetary policies or have just embarked on the path to harsher austerity, it may be advisable for Vietnam to quickly step up her monetary easing so as to create a wider leeway in case she has to tighten the policy again later.

In contrast with developed countries where wide Covid-19 vaccination drives have effectively stimulated their economies, developing nations, such as Vietnam, are still grappling with the complicated development of the pandemic which leaves the latter’s economic situations in tatters. Risks of departing foreign investments as a result of disrupted supply chains due to domestic social distancing measures as well as enfeebled domestic enterprises are now a great source of worry.

The current context may mean that Vietnam should be faithful to a loose monetary policy to shore up the economic recovery. However, as monetary tightening is gradually gaining ground globally, it would be difficult for Vietnam to become an exception if she wishes to have a flexible and smooth investment flow. Then, if the national economy fails to keep up with expectations, policymakers will find it hard to make their policy choices.

Therefore, while central bankers worldwide have yet to tighten their monetary policies or have just embarked on the path to harsher austerity, it may be advisable for Vietnam to quickly step up her monetary easing so as to create a wider leeway in case she has to tighten the policy again later.

Factors that support the further lowering of interest rates

Cutting deeper the policy rate may be the first thing to be considered because the move may exert an expansive effect on capital cost cutting of the banking system, which in turn will positively impact the lending rate in favor of borrowers that are enterprises.

Ever since, however, more than one year has elapsed, and the policy rate has remained unchanged although the national economy is now in a situation much worse than it was last year. The sudden eruption of the pandemic in May has led to more forceful social distancing in HCMC and southern provinces which has brought to a halt the operations of quite a few enterprises throughout the third quarter.

In practical terms, the current conditions may be in favor of a further cut of the policy rate.

First, bank liquidity remains abundant as it has been propped up by a low demand of loans. Meanwhile, investment flows into government bonds are returning as the bonds are due; banks have successfully issued long-term corporate bonds and have increased their charter capital; and bigger volumes of dong have been pumped out via the SBV’s foreign exchange purchasing channels. 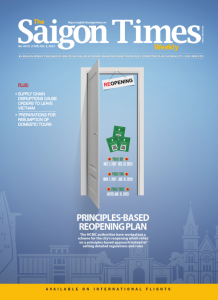 As a matter of fact, if the central bank makes up its mind to further cut the deposit rate by 0.5-1 percentage point, it will be a policy change closer to the market. Yet the ripple effect of this move will positively impact the economy and create a bigger leeway if Vietnam has to resort to monetary tightening as previously mentioned.

To put it differently, by cutting deeper the policy rate at this moment, in case the global trend forces the SBV to raise the lending rate gain, the rise will be equivalent to or at a neglectable margin compared with that of today and therefore be more tolerable to the economy.

Secondly, this year’s inflation is forecast to stay lower than the set target, which is a precondition for a further cutting of the interest rate. It is certain that the inflation rate next year is more unpredictable, particularly in the context of a hike of commodity, material and fuel prices, particularly when consumption demand will rise together with the economic recovery in the coming time. Then, if a further cut of the interest rate is necessary, it will be tough to do so because the favorable economic conditions for such a slash no longer exist.

In addition to the OMO tool, credit expansion may be obligatory. Since the beginning of this year, policymakers have made moves to raise the credit growth cap applicable to banks to meet their demand. However, the crux of the problem at present is how to channel the investment flow to the right place and enhance the corporate sector’s ability to access bank credit. Needless to say, as low as the interest rate may be, it would make no sense if enterprises have no access to loans.