The love for coal-fired electricity remains

Power Zoning Master Plan 8 is waiting for the Prime Minister’s approval following the proposal 6277/TTr-BCT by the Ministry of Industry and Trade on October 8, 2021. Should the Prime Minister approve of this plan or ask for further amendments?

While this is a sector-specific zoning plan, it reflects Vietnam’s growth model and plays a crucial role in determining the quality of Vietnam’s environment, as well as the living standards and well-being of Vietnamese not just in the next five years but also over the next few decades.

It serves as a yardstick for Vietnam’s commitment to fighting climate change, especially with global leaders attending the UN Climate Change Conference (COP26) in Glasgow, the U.K., on October 31, 2021.

Affirming its status as a coal-fired electricity powerhouse

While her goal of becoming a modern industrial nation must be postponed by 10 years, Vietnam has become a powerhouse in coal-fired electricity. According to the Global Coal Plant Tracker, Vietnam ranks sixth in Asia and 11th in the world in coal-fired power capacity. The world’s top three producers are China, India and the United States. Chart 1 shows the scale of Vietnam’s coal-fired power in the group where she ranks from fourth to 13th.

While the scale of Vietnam’s electricity system only ranks 23rd in the world, coal-fired electricity has propelled her into the powerhouse status. This is consolidated by the proposal that 27 new coal-fired power plants should be built over the next 15 years, in line with Power Zoning Master Plan 8. 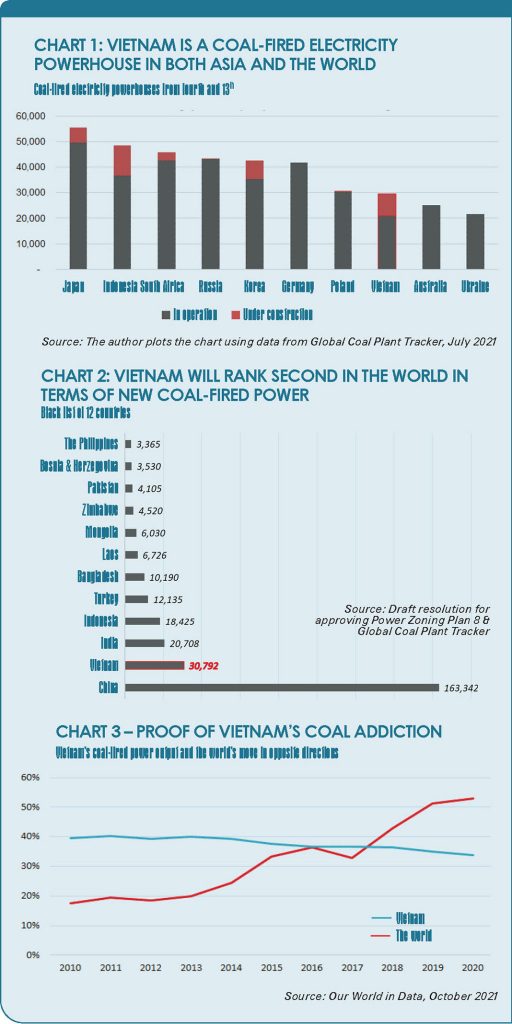 Among sources of renewable energy, solar power and wind power vary frequently and are hard to predict, so they are classified as Variable Renewable Energy (VRE). The global shift to VRE aims to not only protect the environment but also boost economic growth and ensure energy security.

The success of a country in the energy profile transition process is reflected in the share of wind power and solar power in the total power output, called the share of VRE.

In the draft resolution for approving Power Zoning Master Plan 8, the expected share of VRE is at most 12.5% in 2030 and 26.3% in 2045. These are modest targets given Vietnam’s potential and the global shift towards a higher VRE share.

Over the past two years, VRE, especially solar power, has helped to offset the shortfall caused by delays in nine coal-fired power projects with a combined capacity of 6,150MW in the revised Power Zoning Master Plan 7 (triggered by insufficient funds). However, the Ministry of Industry and Trade “dismisses” wind power and solar power as problematic in the operation and regulation of the electricity system, with detrimental impacts on coal-fired and gas-fired power.

In reality, wind power and solar power accounted for only 5.4% of the electricity system, far below the global share of 9.4% in 2020.

This means the challenges facing Vietnam’s electricity system do not arise from the unpredictability of wind power and solar power. Dependence on coal-fired power has posed a barrier to the transition from environmentally detrimental energy to clean energy. Figures on the high VRE share in many countries attest to this.

A report by the International Energy Agency (IEA) in 2014, which studied energy transition in 15 countries, indicated that the share of VRE could surpass 30% at negligible additional costs by virtue of improvements in policies, managerial systems and planning. Another study by the National Renewable Energy Laboratory (NREL) in 2018 shows that it is possible to integrate a VRE share of 25% into the system through managerial solutions. Investment in flexible sources of energy to support the system is necessary only for a VRE share of more than 25%.

The World Energy Outlook 2021 report by IEA shows that as wind power and solar power become significantly cheaper, more than 130 countries have pledged to raise the total capacity and output for these clean energy sources to cater to demand within the next 10 years. The global VRE share is expected to reach 30% in 2030, compared with the current 9.4%. Can Vietnam set her VRE share target in 2030 at the global average, instead of a maximum of 12.5% as at present?

It is baseless to “blame” wind power and solar power for adversely affecting the operation of coal-fired and gas-fired power plants. Worse, it shows rigid adherence to problematic plans. Power Zoning Master Plan 8 falls into the coal-fired power trap that the world is trying to move away from, ignores the clean energy achievements that Vietnam has reaped over the past two years and runs counter to the clean energy revolution rapidly taking place on a significant scale around the world.

On September 21, 2021, China President Xi Jinping told the United Nations (UN) that China would boost its support for other developing countries in embracing eco-friendly development with low carbon footprints and would not build new coal-fired power plants overseas. While this should be taken with a pinch of salt given the lack of a specific implementation road map, it should be acknowledged that funds for coal-fired power are on the wane.

In reality, according to GreenID, up to 18 projects, or two-thirds of the projects planned, have not gained access to funding. Many coal-fired power projects have fallen behind schedule due to capital shortages. Unfortunately, policymakers at the Ministry of Industry and Trade do not seem to wake up yet.

As China, Japan and Korea pledge to cease investment in overseas coal-fired power projects, the future for these plants seems as bleak as that of Power Zoning Master Plan 8 in its current form.

Coal-fired power a thing of the past after COP26

The Paris Agreement that Vietnam signed in 2015 aims to cut emissions so that the global temperature increase will be less than 2 degrees Celsius this century, with an aim of keeping it at not more than 1.5oC.

Vietnam’s climate commitment is considered as critically insufficient, according to Climate Action Tracker. This independent research organization contends that Vietnam’s stand shows minimum effort or no action, and is inconsistent with efforts to curb global warming. If all countries adopt the same stand, global warming will exceed 4oC.

In other words, Vietnam is considered one of the countries responsible for the climate crisis. Jim Yong Kim, president of the World Bank, said five years ago that if Vietnam continued to add 40,000MW of coal-fired power to its system, it would be a disaster for humanity and the Earth.

IEA’s “Net Zero by 2050” report shows that departing from coal-fired power is instrumental in ensuring global temperatures do not rise by more than 1.5oC. UN Secretary-General António Guterres has urged governments, private firms and local authorities to cease their deadly coal addiction by shutting down worldwide coal-fired power projects. He says that gradually eliminating coal-fired power is the single most important step towards achieving the Paris Agreement target.