Real estate and stocks which are seen as risky investment vehicles are facing strict financing controls. Manufacturers have begun to feel the squeeze as they have found it harder to borrow from banks.

Production and business activities have gradually returned to normalcy as the economy has steadily recovered following the fourth wave of the Covid-19 pandemic. The demand for funding has surged as a result.

Though they have signed home purchase contracts with project developers, many people have been struggling to take out a bank loan. Therefore, their payment plans might be at stake. If the situation continues, the property market will eventually suffer.

The credit crunch facing the property market has been around since early this year. Earlier, credit tightening only affected project developers as they could not issue corporate bonds to raise funds like before. Now, individuals who need money to pay for the homes they buy have found it almost impossible to borrow from a bank.

Several banks already used up their credit growth quotas in the second quarter of the year while the possibility of the central bank adjusting up their quotas is not high at the moment. This is one of the reasons banks often cite when they decline a loan request. Data from the State Bank of Vietnam (SBV) showed that outstanding loans in the year to the end of July had grown 9.4% against the beginning of the year, whereas the SBV’s credit growth target for this year is 14%. Analysts believe it is not until the latter half of the third quarter when a few eligible banks might have their credit growth quotas increased.

However, there is a possibility that certain banks have actively tightened lending given that risks remain in the economy, especially in the real estate sector.

There remain external risks, including a possible recession in the U.S., the zero-Covid policy in China and tensions between Taiwan and China, according to market watchers.

Input capital costs are increasing as savings and deposit interest rates have been rising since the start of the year, coupled with the rise in interbank interest rates in the past two months. Meanwhile, lending rates are still influenced by the central bank, hence the shrinkage of the profit margin of lending operations.

At the August 11 meeting with Prime Minister Pham Minh Chinh, many business executives expressed concern that banks had declined to extend new loans, throwing businesses into a difficult position. This is a real challenge for enterprises that had been battered for two years by the Covid-19 pandemic. 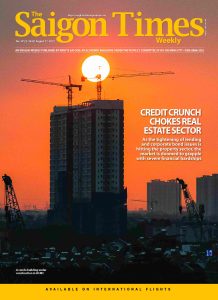 If the situation persists…

If the issue is not resolved, the economy would suffer a lot.

First, it is the real estate market. What happened to China’s real estate market recently is a lesson. Banks in the world’s second largest economy suddenly tightened lending to the overheated real estate sector. Many individual property investors unexpectedly canceled or delayed their payments. For property developers, deposits, down payments and installments were always vital sources of funding. Then these sources of capital were no longer available and bank credit dried up, and property companies were at risk of going bankrupt.

Chinese authorities realized the problem later, so they asked the banking system to resume financing this sector. Still, problems in the real estate market that left a domino effect on the financial market and the banking system have not been resolved.

For Vietnam, it is concerning that many individuals signed home purchase contracts with project developers and could not access a bank loan. Multiple real estate projects have ground to a halt, or have faced handover delays or legal problems as developers have used their own projects or land use rights as collateral for loans. If funding for this market is choked, Vietnam would face the same problem as China.

Even though the corporate bond market has stagnated due to default risks, real estate companies have been able to manage to raise funds from debt issues. Statistics showed that in the first seven months of this year, property firms still came second with some VND44.88 trillion worth of corporate bonds sold, accounting for 22.4%. But they were way behind banks that accounted for 52.3% of all corporate debt sold.

For producers, difficult access to bank credit is a bigger problem. Manufacturing activities could take a longer time to recover or could be interrupted as they cannot secure enough funds to import input materials and others, leading to an undersupply of goods in the economy.

While other countries are struggling with runaway inflation, Vietnam has been able to put inflation under control thanks to the growing agriculture sector helping maintain food security. The country is not entirely dependent on fuel imports, whose prices have shot up due to the Russia-Ukraine military conflict.

This does not mean the Vietnamese economy is completely immune to external shocks. The Government has spared no effort to keep consumer prices in check, such as fuel prices. Therefore, it is necessary to beware of the scenario of manufacturers facing the capital squeeze as it may lead to an undersupply of goods and then boost inflation. Moreover, with the 2-percentage-point interest rate support package still in place, if credit growth quotas are not revised up soon, it would be hard for banks to make the aid package a success.

The Prime Minister has asked the SBV not to tighten credit in an unreasonable way, ensure proper use of capital and minimize risks to the market. For the SBV, the objectives of its monetary policy—curbing inflation, stabilizing the macro-economy, stabilizing the foreign exchange market and guaranteeing safety for banks—remain the top priority. In fact, the central bank is reviewing and adjusting the credit growth limits for the rest of this year for certain banks.