According to the e-Conomy SEA report 2022, 83% of investment funds expect the number of investment projects in Vietnam will continue to grow in the 2025-2030 period. Vietnam, Indonesia and the Philippines are among the potential markets for digital economic development.

Growing at a double-digit rate in 2019-2022, the digital economy in Southeast Asia is expected to reach a value of nearly US$200 billion in 2022, according to the e-Conomy SEA report 2022 issued by Google, Temasek, and Bain & Company.

A strong spike in Internet users, a high proportion of digital consumers, and a shift induced by the Covid-19 pandemic have caused phenomenal growth of the Southeast Asian digital economy, exceeding the rate predicted earlier by these organizations. The report also predicts the beginning of a decade of digital economic development, with the Gross Merchandise Volume (GMV) expected to exceed US$300 billion in 2025 and possibly US$600-1,000 billion in 2030.

The regional digital economy will still be led by Indonesia, but Vietnam is also speeding up to assume the second position alongside Thailand.

The prominent SEA growth is fueled by capital from investment funds. In 2021 alone, nearly 2,700 projects in the region attracted a record-breaking investment volume of US$26.7 billion. Singapore still took the lion’s share with 46%, followed by Indonesia with 34% and Vietnam with 10%. Funding was largely channeled into spheres such as e-commerce and delivery services as well as new-tech, prospective products in SEA such as blockchain and Artificial Intelligence, especially Healthtech (healthcare), Edtech (education), Software as a Service (SaaS) and Third-Generation Internet (Web3).

The key driving force in the region in general and in Vietnam in particular is the e-commerce sector. With the phenomenal growth rate during the years-long pandemic period, the e-commerce sector in Vietnam now makes up a high proportion (some 65% of GMV in 2022) and is expected to lead the growth in the coming years though it may decelerate compared to previous years. Other sectors in the digital economy such as delivery services, tourism and entertainment are also posting strong growth. 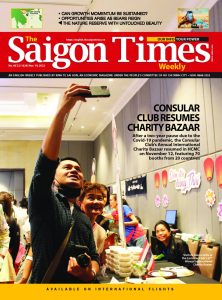 Apart from more traditional sectors in the digital economy, other sectors are also thriving in the Vietnamese market such as SaaS and Web3 projects, which are capturing strong interest from the tech community in Vietnam, including major tech-based enterprises like FPT and VNG.

Multiple investment funds are eyeing Vietnam as a highly potential market, with 83% of them having plans to increase investment in the country in the 2025-2030 period, the highest proportion in the SEA region. Besides common advantages in the region in terms of populations and demographic features, Vietnam is appreciated for its high quality and low cost of labor.

The high potential of Vietnam’s digital economy is making the country a spotlight for investors, especially in spheres like blockchain, Healthtech and Edtech.