Why an interest rate hike early into the year?

The interest rate has been rising since after the Lunar New Year holiday, or Tet, as many banks have faced dwindling liquidity. The point at issue is whether the interest rate will soon cool down or continue to rise.

The average interest rate, in fact, started to show signs of a hike in the last two months of 2021 when the economy braced for reopening, prompting many banks to reverse course to raise interest rates. As the new year began, many banks geared up for a rate rise, even at a shorter interval, with some like VPBank hiking interest rates twice in just a month.

Such a rate rise is the inverse of previous years’ practice when the interest rate tended to rise before Tet due to poor liquidity and ebbed after that. This year, many banks continued the rate hike even after the long holiday. Commenting on the move, many analysts are of the opinion that the cash flow has been returning to banks slower, exerting pressure on banks for liquidity.

Indeed, alongside a rise in borrowing rates, the interbank rate has also surged despite strong injections of cash by the central State Bank since before Tet. Latest update on the State Bank’s website showed the overnight rate on the interbank market jumped to 3.32% annually on February 9, rising by almost 260 basis points compared to the end of 2021, or a 4.5-fold increase.

Compared to the point of time right before Tet when the interbank rate usually surges due to limited liquidity before the long holiday, the overnight rate rose by 90bps, the one-week rate rose by 119bps, that of one-month tenor 56bps, three-month borrowing 30bps, and six-month rate by 144bps to 4.27% as of February 9. Such data point to a liquidity constraint among banks.

In previous years, the State Bank of Vietnam tended to withdraw funds from the market to balance the amount pumped before Tet to support liquidity, but this year, statistics show the central bank still had to make net injections to support banks’ liquidity after Tet.

Another noteworthy activity is that banks are stepping up mobilization via online channels such as digital banking, offering higher rates or bonus rates far outstripping over-the-counter deposit rates to lure clients. For example, VPBank launched Prime Savings via the app VPBank NEO, offering clients an annual rate of as high as 12.2-12.4% for the first month for 12-month deposits, while the rate for the following months is 6.1-6.2%. 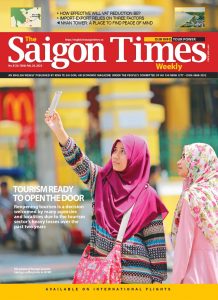 As stated above, deposits tended to increase strongly after Tet in previous years, bolstering liquidity, but this trend seems not to have surfaced this year in the context other more lucrative investment channels are sucking money out of banks.

First, the stock market has bounced back strongly after Tet and attracted strong cash flow. Earlier, many investors in late 2021 locked in profit ahead of a sharp correction, and deposited their money at banks. They, however, are returning to the stock market after Tet to expect a stock surge, especially when many stocks have plummeted to an attractive level.

Second, the real estate market has turned more bustling lately after a sensational land auction in Thu Thiem, alongside infrastructure development plans under the economic recovery program that will spur property prices in many areas. Given the low interest rate, funds are being channeled into the real estate sector.

Third, the bullion market is also heating up as inflation has spiked in the United States coupled with the geopolitical confrontation between Russia and Ukraine which observers fear could escalate into a military conflict. Influences from the global bullion market coupled with the effect of the “God of Wealth” Day have caused the benchmark SJC price to beat VND63 million a tael. It is possible that a sizable amount of money will be withdrawn from banks and channeled into the bullion market given the gold price uptrend, especially at a time the deposit rate remains low while inflation is under pressure to rear its head again.

Although the consumer price index inched up a mere 0.19 in January and rose only 1.94% year on year, which is the lowest since 2017 (except 2021), this year’s inflation is still unpredictable owing to the rising demand caused by economic reopening, pressure from the global oil price heating up and short supply on the domestic market.

For banks, while borrowing looks somber, lending has seen a takeoff. In 2021, the credit growth posted over 13.5%, with the fourth quarter lending alone accounting for more than half of the growth. In January, credits made a sharp increase of 2.74% against the end of 2021 and rose 16.32% year on year, which is a giant leap compared to a credit growth of only 0.53% in January last year.

The strong credit growth indicates that cash flow in the economy has been greased, with the capital demand among businesses recovering strongly. Analysts believe that with the economic reopening, the demand for capital will continue to fly high in the coming time though the credit growth is capped at just 14% this year.

Furthermore, with economic stimulus packages being launched this year plus soft loans extended by banks in the coming time, the credit growth is expected to pick up right in the first months of the year, which will force banks to hike the deposit rate as seen lately.

Despite all such circumstances, many people believe that a rate hike will not be too strong as management agencies will resort to necessary vehicles to keep a lid on interest rates so as to support economic recovery. Therefore, any upsurge of the interest rate will be short-lived, while in the long run, the interest rate will stay stable and under check of the monetary authority, especially at a time the Government and the State Bank consider a rate cut an important target for this year.