Everyone getting rich except farmers

Agriculture is the strength of the Mekong Delta. However, the large gap in living standards and employment opportunities between the agricultural and industrial sectors continues to create waves of migration from the southwest region to the southeast region. How can the Mekong Delta people emerge better off from agriculture and no longer have to seek other opportunities elsewhere?

The Annual Economic Report 2022 by the Vietnam Chamber of Commerce and Industry (VCCI) with experts from the Fulbright School of Public Policy and Management (FSPPM) has shown that agriculture is still a big bright spot in the Mekong Delta when it maintains a positive growth rate.

However, both the industrial and service industries are negative (with -0.8 percentage point and -1.8 percentage points each, according to the region’s overall growth), leading to a decrease of 0.43% in the region’s economy in 2021 compared to the previous year. According to the report, it is necessary to restructure the economy of the Mekong Delta.

Pham Thai Binh, director of Trung An Hi-tech Agriculture Joint Stock Company (Can Tho City), said that when a large sample of a field model was proposed by the Ministry of Agriculture and Rural Development, from the locals (call for investment) to businesses, all the farmers wanted to implement it. In reality, it has not achieved the desired result and, so far, only a few units have done it. He said that it is necessary to find the bottlenecks to solve them together. If the goal is to increase the income of farmers, it is better to find a new model to help them grow high-quality rice to be sold at a higher price than to reduce the rice crop area.

Thon rued that all the people who do business with farmers—supplying agricultural materials, seeds, fertilizers, pesticides, food companies, etc.—get rich, while farmers are still struggling.

He stated that the responsibility to ensure national food security has led to the Mekong Delta maintaining a very large area of land for rice crops.

Though it helps people come out of poverty and stabilize their lives, it’s not enough to make them rich and help the region’s economy improve.

According to the annual Mekong Delta Economic Report of 2022 on August 1, the proportion of the agricultural and service sectors has decreased slightly by 1-2% during the reference period (2016-2021), while industry increased slightly from 25 to 27%. In the last three years, the proportion of agriculture has remained unchanged in the region’s economic structure (accounting for 32%). The “burden” of creating food security for the whole country creates an invisible barrier to the economic growth efforts of the Mekong Delta, which depends on the industrial and service sectors.

That “burden” also causes the Mekong Delta region to degrade in terms of the environment, water resources and soil quality, making the delta, which was very rich, gradually lose its vitality. “All of these factors are intertwined, hindering the development of the Mekong Delta,” Dr. Anh emphasized.

Migration and employment problems in the Mekong Delta

Low income and limited job opportunities in the Mekong Delta have led to people in this area moving to the Southeast to look for a change in employment and income.

Speaking to The Saigon Times about the announcement of the annual Mekong Delta Economic Report in 2022, Nguyen Phuong Lam, director of the VCCI Can Tho branch, cited the statistics of this unit showing that, during the last pandemic, there were over 550,000 workers from the southeast region who returned to the Mekong Delta. 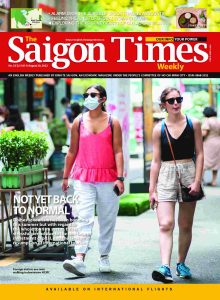 However, by the end of the first quarter of 2022, after the fourth Covid wave, more than 450,000 workers from the Mekong Delta returned to the southeast region to continue working, meaning less than 100,000 workers remained in the Mekong Delta, mostly older people or those who had followed their families in the past. Lam said, “These numbers show that the Mekong Delta has not created job opportunities, nor is it guaranteed to live, so they continue to migrate.”

To solve the problem of “away from farming” but not “away from home”, according to Lam, the Mekong Delta must attract businesses and investors, “but the premise for this is to invest in infrastructure, then the investors would come”.

Dong Van Thanh, chairman of the People’s Committee of Hau Giang Province, at the announcement of the annual Mekong Delta Economic Report in 2022, said that because the region cannot create jobs, people are forced to go to HCMC, Binh Duong, and Dong Nai to look for job opportunities. He said, “Clearly, over the years, the number of businesses moving to the Mekong Delta is meagre, except for Long An, and not enough to solve the employment issue for workers.”

According to Thanh, in the current context, the Mekong Delta region has favorable conditions to attract investors, including increasingly improved transport infrastructure, large investment incentives with low labor costs, and rent. “However, the problem is ensuring high-quality human resources to meet the needs of businesses,” he said.

According to Lam, this is a problem that requires long-term decisions and programs. There are 10 out of 13 provinces in the Mekong Delta currently at the bottom of the national list in terms of the ratio of trained workers to the total number of people of working age.

The director of VCCI Can Tho branch emphasized that this is the story between “have and gain”, which means investors often require a skilled workforce as a condition for investment, but if this workforce is trained and investors do not appear, the story remains unresolved.

“I think the local government must have a strategy shape labor training according to a number of potential industries compatible with the recruitment needs of investors, and when investors come, the supply and demand in labor will continue to be resolved,” said Lam.

Once the industrial and service sectors in the Mekong Delta develop at a higher proportion, the number of jobs in this region would also increase, the workers of the Mekong Delta, even though they are “away from farming”, won’t have to be “away from home” or go to the southeast region but can find a job, settle down and have a good career right here.