The race to hike interest rates is on

Savings interest rates are on the rise and likely to go up further in the coming months.

Adding 0.5-1 percentage point per annum to the interest rates they set for savings of six months or longer is what quite a few banks are doing. For example, when a customer deposits VND500 million or more, with a fixed interest rate of 5.3% per year for the six-month term, the actual rate recorded in the book shall be 5.8%. In case the amount is VND1 billion or larger, the real interest rate may rise to 5.9-6% per annum. The bigger the deposit, the bigger the addition to the interest rate. An extra one percentage point per year goes to savings of VND5 billion or more. When depositing VND100-200 million for nine or 12 months, customers may receive gifts in kind such as a set of tea cups, a set of drinking glasses, a raincoat, a thermos, an umbrella, etc.

Prior to the pandemic, the highest interest rate for 12-month savings was 7% per year. Now, many banks are keeping it at 6.7-6.9%, whereas some have lifted it to 7-7.1%, or even 7.5% a year. As for the interest rate for short-term deposits of less than six months, joint-stock credit institutions are applying the ceiling rate of 4% for all terms—one, two, three, four, and five months.

In addition to charging a little higher interest rate, some banks waive fees for transferring money to relatives abroad, and annual fees for opening international and domestic cards when customers deposit a fixed amount for 6-12 months. The longer the better. The 13-month savings term, having been suspended for a while, is now available again, with an interest rate much higher than that for the 12-month term.

The cyclical factor plays a role in the increase in the deposit rates banks are applying. Firstly, the capital mobilization target for the first half of the year must be achieved. Each bank assigns targets to their branches, urging them to speed up. Capital mobilization is one of the top criteria for bank employees to get bonuses and a pay raise. Secondly, certain banks may have gone overboard with lending, leading to the need to have an adequate amount of deposits to keep the loan-to-deposit ratio at a safe level according to regulations.

Those banks which have given out a lot of real estate loans, with the risk provisioning level for such loans at up to 250% (versus only 50% for loans to the five preferred areas), are more eager to entice deposits for refinancing and debt repayment extensions. 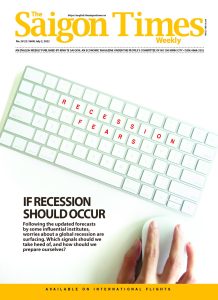 The rise in input interest rates is also due to other reasons. As soon as the U.S. Federal Reserve (Fed) hiked the federal funds rate by 0.75 percentage point, the overnight interest rate for the U.S. dollar on the interbank foreign currency market (where banks borrow from each other) picked up from 0.9% to 1.5% per annum, “outclassing” the overnight rate for the dong. Stable as the interbank dong interest rate has been since the beginning of June, it is not easy to arrange long-term loans since every lender requires collateral. The law does not stipulate collateral is a must for borrowing in the interbank market, but in the past, there have been cases where borrowers of six-month loans failed to fulfill their repayment obligations, making lenders extremely cautious when it comes to loans with a term calculated in months.

With regard to the exchange rate, the dong’s depreciation against the greenback has been faster for the past two weeks, as most currencies in the world are losing ground to the U.S. dollar and the dong is no exception. Since the beginning of the year, the dong has dwindled by some 1.5% against the U.S. dollar, with some predictions that the fall may be 2-2.5%, higher than the initial forecast of 1% given earlier this year. The depreciation of the dong is still less significant than that of other currencies in the region (most of which have declined more than 5%) and also slighter than that of major currencies such as the euro (down 7.67%), the yen (down 17.26%) and the pound (down 9.67%).

The State Bank of Vietnam has sold a considerable volume of foreign currency—US$7 billion according to RongViet Securities Corporation, and US$8 billion according to another securities company—in an attempt to stabilize the exchange market as long as the situation allows. This May, the trade balance turned from surplus to deficit. Vietnam’s exports may come under pressure as sea freight rates are soaring, and warehouses in Europe and the U.S. are now fully occupied (until new imports for Christmas and New Year’s Eve). Household items, electronics, garments, shoes, children’s toys, and wooden furniture are being dumped into the market, resulting in a drop in the import demand stateside as well as in Europe.

The U.S. dollar once again displays its influence in the global financial markets. Even though the Fed has aggressively put up interest rates and international crude oil prices have been adjusted, high inflation expectations remain and the Fed is likely to go for another interest rate hike of 0.75 percentage point next month. The interest rate on 30-year home loans in the U.S. made a quantum leap to 6.28% per annum in mid-June.

Every action of the Fed will more or less have an impact on the money market in Vietnam, despite the fact that the liquidity of the dong is still abundant thanks to the increase in total means of payment and the central bank not yet extending credit growth limits. Banks are expecting to be granted extensions in July, although the regulator is still deliberating over it. The author of this article personally believes it is not until August that the credit growth limits will be raised for certain banks, only the highest-rated ones.

With savings rates on the rise, the interest rates for loans in the dong will go up sooner or later. For this reason, banks are reviewing and cutting down on loans with bad prospects (no refinancing and debt repayment extensions for such loans). Credit tightening in order to rein in inflation at a time when the demand for loans is strong, especially in the real estate sector, makes it almost certain that output interest rates, except for the five preferred areas, will grow further.